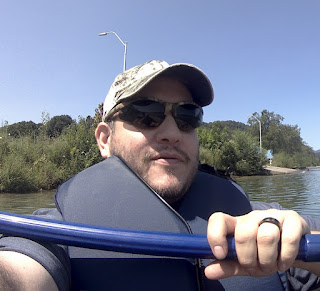 Like any writer I became interested in books at a young age. I liked the way the books from the library smelled, and the sound of old books when you turn their pages. I remember waiting for my parents and sister to go to bed at night so I could turn on my flashlight and stay up reading Island of the Blue Dolphin By: Scott O'Dell.

When did you write your first story?

I wrote my first story when I was ten. I recall it vividly because I got grounded for writing it. The story was just two pages long and had to do with kids killing monsters in a haunted house. I was a big Monster Squad fan. I read the story out loud to my parents and they told me never to write anything like that again. It was at that young age that I realized the profound effects of the written word. How it could make people feel. How a few simple words could change a life.

When did you publish your first novel?

Why do you think horror books and movies remain so popular?

The genre has always been there and will always be. People need an escape from reality. A good safe place to drift away from mudane jobs and the pressures of living. Horror books and movies are popular because the lies are believable. It's a blur of reality, a hint of our world, but far enough away from it to reap a form of cathathris from it.

Why are people still obsessed with being scared?

People will never stop being obsessed with being scared, ever. It's a drug, a high. Fear gets the blood pumping. Maybe it's something leftover from when we were sitting in caves around a fire listening to a hunter being attack by a black bear, or the Native American Wendigo stalking the desolute lands of cold. People need fear. They need that feeling, that rush. It's why amusment parks were built.

Everyone and everything. Inspiration lurks at every corner. I can't tell you how many times I saw something as inspiring as a girl walking down the street with a stuff animal and it became the bases for a long running series of novellas called A Zombie Apocalypse. Finding the inspiration is something that I don't do. I just try to let it come to me. Strangers make for great tales. Somebody sitting along at a diner with plate of steak and fries in front of them and a dour expression seems so simplistic but could become the start of something great. Why won't he eat his steak? Is he waiting for someone? Is he simply pretending to be human but doesn't know how to eat? I'm telling you, inspiration lives everywhere.

Do you believe in the existence of Bigfoot or The Loch Ness Monster?

To quote my favorite fictional character, "I want to believe." Native American's have a long history with stories relating to Sasquatch or The Hairy Man or Bigfoot way before the white man picked it up. I think there's a layer of truth to these tales. For our sakes, I hope that nobody ever finds him. I hope he remains a mystery for generations. However, one day we might just wake up and find that Bigfoot was staring at us in the mirror all this time. If indeed he is the missing link.

Some scientists just took some samples of the waters of Loch Ness and came to some stunning conclusions. In the eighties they did a sonor scan of the entire loch and did run into something they couldn't explain. The pieces are slowly coming together. I doubt they'll ever find the bones of The Loch Ness monster on the bottom of the lake but one must keep an open mind in such matters.

What are some of your favorite horror books?

The Hobbit By: J.R.R Tolkien

Anything written by Terry Brooks

I like old school horror. The Last Man On Earth, Night Of The Living Dead, Dawn Of The Dead (1978 Version), Jaws, The Haunting Of Hill House, Communion, Dark Skies, John Carpender's Vampires.

Currently, I'm working on a YA novel. I might pitch it to a publisher and I might not. I try to put out a novella every month and have for the last ten years. I have a list of projects for this year but things can always change. There's a shark book, Bigfoot book, haunted house book, zombie book, and  some nameless stories bouncing around my head.

Keith Luethke is an indie author who specializes in writing horror novellas.His work has broken the top Kindle 100 in horror. He grew up in upstate New York and now spends his days in the quiet rolling hills of East Tennessee. He loves to hear from fans and has a fear of open spaces and star filled nights.