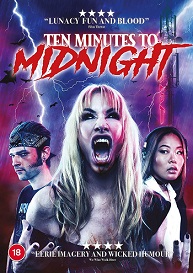 Ten Minutes to Midnight - Released on DVD from 24th May
And to celebrate we have a great competition for you and 3 copies on DVD to give away.
Synopsis:
This comedy-horror film centers on veteran late-night radio DJ Amy Marlowe (Caroline Williams) as she goes to work even after a rabid bat bit her. She recently discovered that her boss, station manager Robert (William Youmans), is about to fire her, to be replaced by new college graduate Sienna (Nicole Kang), so Amy insisted on reporting to work on the night of a violent storm. However, as the storm ravages their town, Amy witnesses evil forces mysteriously killing her co-workers one by one outside her DJ booth. Directed by Erik Bloomquist.
Pre-order on Amazon: https://amzn.to/33TY8A4
For your chance to win just answer the question below.

COMPETITION CLOSED
Terms and conditions
1. Closing date 31-05-21
2. No alternative prize is available
3. When the competition ends as indicated on this page, any and all entries received after this point will not count and emails blacklisted due to not checking this page first.
4. Winners will be chosen randomly and will be informed via email.
5. Entries that come directly from other websites will not be accepted.