COMPETITION: Win The Dark and the Wicked on DVD 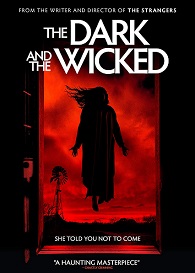 The Dark and the Wicked - Released on Blu-ray and DVD from 5th July
And to celebrate we have a great competition for you and 2 copies on DVD to give away.
Synopsis:
FROM THE director of the renowned, hit horror The Strangers, Bryan Bertino, comes his latest critically acclaimed feature The Dark and The Wicked, which makes its UK Blu-ray debut from Acorn Media International in conjunction with Shudder, following its success on the streaming service. This the first of many exciting Shudder titles Acorn will be releasing on physical formats this year.
Bertino has been garnering huge international praise and has been lauded by Esquire as ‘There’s no filmmaker working today more adept at generating scares via the sudden appearance of shadowy background figures’. His latest film is an extremely disturbing, tense, atmospheric chiller.
The Dark and The Wicked features a stellar cast that sees The Umbrella Academy’s breakout star Marin Ireland (The Irishman) and Fear the Walking Dead’s Michael Abbott Jr. as siblings who must return to the family home to say their goodbyes to their dying father, but are met with a situation beyond their wildest nightmares. The film will be released on Blu-ray, DVD and on digital to download and keep on 5 July 2021.
On a secluded farm, a father (Michael Zagst – Divine Access) is bedridden and fighting through his final breaths while his wife slowly succumbs to overwhelming grief. Siblings Louise (Marin Ireland) and Michael (Michael Abbott Jr.) return home to help, but it doesn’t take long for them to see that something’s terribly wrong with their mother (Julie Oliver-Touchstone – Preacher) —something more than her heavy sorrow. Gradually, they begin to suffer a darkness similar to their mother’s, marked by waking nightmares and a growing sense that an evil entity is taking over their family.
The Dark and the Wicked will jangle your nerves and either keep you on the edge of your sofa… or running for safety behind it.
Pre-Order from Amazon at https://amzn.to/3w1Ger1
For your chance to win just answer the question below.

Competition Closed
Terms and conditions
1. Closing date 12-07-21
2. No alternative prize is available
3. When the competition ends as indicated on this page, any and all entries received after this point will not count and emails blacklisted due to not checking this page first.
4. Winners will be chosen randomly and will be informed via email.
5. Entries that come directly from other websites will not be accepted.
Posted by JD at 18:26