Interview with The Soska Sisters 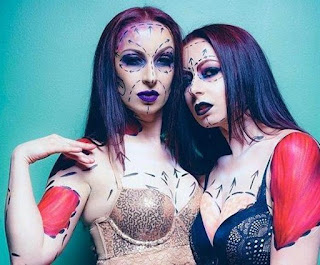 Ahead of Horror Channel’s premiere of RABID on June 12, Jen and Sylvie Soska reflect on the challenges of re-imagining Cronenberg’s body horror classic, meeting the great man and their new monster movie, BOB.

RABID is having its channel premiere on Horror Channel. Excited?

S: The Horror Channel has supported us and our work since the beginning, so it’s a special treat to have the newest film premiere there!

J: We are so excited. Having RABID on Horror Channel feels like coming home. They’ve been very kind to us. We are happy to have so many of our films on there.

We all, of course, remember that RABID was one of David Cronenberg’s earliest films. Going back to when you were first approached to do the remake, what was your initial reaction?

J: We are not traditionally fans of remakes but when we learned RABID was being remade with or without us we took it upon ourselves to pay tribute and respect to Mr Cronenberg. It had been the first attempt at a remake or re-imagining of his work and he has a huge impact on us and our work. We only had our country, our peers, and one of heroes to let down. No pressure, right? It was important to us his legacy was respected and that out-weighed any doubts for us.

S: We were hired because the producers, who had the property, were very unfamiliar with Mr Cronenberg’s work. They had assumed his films was ‘straight forward horror’ whereas all this material, even his earlier films, has a lot more to say than just surface level body horror. We hired cast and crew who had worked on Cronenberg films to make sure we were honoring his work.

The original became one of the cornerstones of “body horror”, a subgenre which your work has gleefully embraced. Was it important that your version honoured this?

S: I don’t know what kind of filmmakers we would have been in a world devoid of Cronenberg’s brilliant brand of body horror – it’s so transformative. Since we were the first to remake one of his films, we wanted to fully embrace what makes a Cronenberg classic body horror. Luckily we teamed with the prosthetic geniuses at Masters FX to make that happen.

J: Absolutely. Without the success and fan base of the original, there wouldn’t have been a demand for our re-imagining. I think where many remakes fail is they don’t respect the original material and creator. Honouring both were our prime objectives. There are not only nods to the original RABID in ours, but to numerous Cronenberg films from actor choices to character names to the type of practical FX we used.

Cronenberg ended up casting an adult star, Marylyn Chambers, in the lead role.  Did you ever consider doing the same?

S: Very much so. We didn’t get the support on RABID, although we did try to get a cameo appearance but we got limited on how many Americans we could use in the film. We had another project that fell through that we wanted to cast Xander Corvus as the lead for. Currently, we have a role for Tommy Pistol in an upcoming film. We have a lot of friends who work in the business and a lot of respect for what they do.

J: Apparently it’s much more difficult to cast an adult film star these days. There are some really silly stigmas that we hope to help tear down by casting some of our very talented friends who work in adult film.

Is it true that the first time you met Cronenberg was after the film was made?

S: Yes, and it was such a wonderful experience. He is truly exactly the person you would expect, witty and intelligent with such a brilliant outlook on the world and life. He said that the film ended up where it should have. It was very kind of him to say. I know he’s busy on his own projects, it’s such a great time to be a fan of his with what’s coming.

J: We met at a coffee shop and showed up so early but all the booths were taken. We paid a girl $100 to give us hers. Best money I ever spent. David is such a gentleman and so brilliant. Chatting DEAD RINGERS with him was a highlight of my life. Don’t meet your heroes unless they’re David Cronenberg.

The film had its World Premiere at FrightFest, to great acclaim. How did the reception in the UK compare to back home in Canada?

S: It reminds me of Cronenberg comparing the two receptions, he mentioned that the UK tended to get his work before anyone at home did. The FrightFest fans and all the people involved in that event absolutely spoil filmmakers. When we made AMERICAN MARY, no one thought anyone would like it, but we premiered at FrightFest with huge success. The people there truly love the genre, so they’ll let you know what they think.

J: Ha ha, I might as well have not released a film. Canada had never been terribly supportive of us, but they weren’t supportive of David early on either. Now they seem to celebrate him. The UK has always felt like home, especially FrightFest. I’m so grateful to the gents there, Paul, Alan, Greg, and Ian, for how kindly they’ve treated us and our work. There’s no film fest in the world like FrightFest. 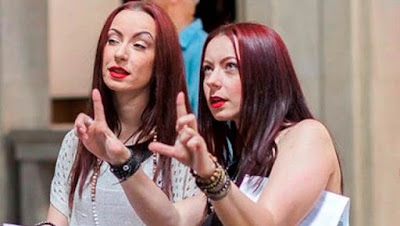 Would you consider remaking another Cronenberg film? DEAD RINGERS for example, which you have gone on record as saying you’d like to do.

S: Very much so! I know Rachel Weisz is currently adapting it and we would love to be a part of bringing that to life. That said, we are twins and have been deeply thinking about this concept for years. I wouldn’t be surprised if we did a remake down the line still – my dream casting is getting the Olsen twins. You rarely see twins creatively in charge of twin content and narrative – I think it would be fascinating.

J: We’d love to re-imagine DEAD RINGERS. We have such a deep personal connection to that film and so rarely are twins the ones who get to control their own narrative. Regardless of if we’ll be invited to the limited series being made now, we will definitely make our version down the line.

Being known as great huggers, how have you been coping with lockdown?

S: Maybe we knew something, stockpiling on all those hugs back in the day when you could be so brazen to hug anyone and everyone? I’m looking forward to being able to hug again. Been saving hugs for everyone!

Have you managed to catch any good horror movies this year?

S: LOVED Jill Sixx’s THE STYLIST. It’s not just a phenomenal film with killer performances, but it started as a short, Jill tried to get funding and launched a kickstarter to make it happen, and now it’s a feature film that everyone is talking about. She’s a director to keep your eye on. BLACK BEAR and WANDER DARKLY are also haunting and wonderful.

J: SAINT MAUD was fucking incredible. Sylvie calls it Catholic Joker, ha ha. Brandon Cronenberg’s POSSESSOR was outstanding. I highly recommend the director’s cut. Brandon is a genius in his own right. Steve Kostanski’s PSYCHO GOREMAN was probably my biggest and best surprise of the year.

S: Very proud to say we are working for DC as writers for their comics. They haven’t announced our first story which is finished and still coming out, but they have announced that we are working on a Zatanna title with Vanesa Del Rey depending on their #DCRoundRobin voting via twitter and Instagram. They have some incredibly exciting characters to get to work with!

J: We have two films in production (that I can mention), UNSEEN and BOB. UNSEEN is our first video game adaption and it’s a fully immersive horror experience as it’s a game that simulates being blind. And BOB is our original monster movie that we’ve been wanting to make since AMERICAN MARY. We are working now with RADAR and Prospero Pictures and you can expect a lot to be coming from these wonderful new partnerships. 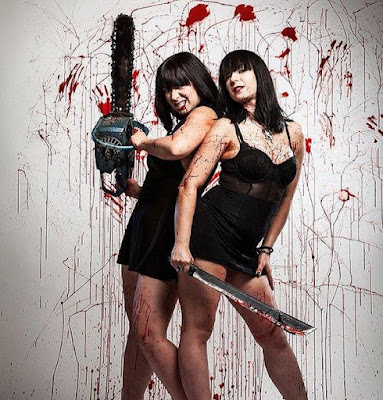