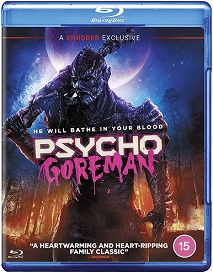 Psycho Goreman - Released from 4th October
And to celebrate we have a great competition for you 2 copies on Blu-ray to give away.
Synopsis:
E.T. Meets Troma in Psycho Goreman a madcap intergalactic sci-fi  comedy from director Steven Kostanski, which arrives on Blu-ray on 4 October 2021 from Acorn Media International in association with Shudder.
When siblings Mimi (Nita-Josee Hanna – Books of Blood) and Luke (Owen Myre – They Don’t Know) discover a strange, glowing stone while playing outside, they unwittingly resurrect a blood thirsty ancient alien overlord (Matthew Ninaber – Transference: Escape the Dark).
Entombed on Earth millions of years ago after a failed attempt to destroy the universe, he’s back to wreak havoc, but the children quickly learn they can control the bad-tempered blue creature with the gem and rename him Psycho Goreman. After the initial fun and taunting using their new-found powers,  they begin to panic when it dawns on them they could be in mortal danger…
The overlord’s reappearance has drawn the attention of intergalactic friends and foes from across the cosmos, and a frenzy of alien combatants descend on the small suburban town to battle for the fate of the universe…
Get ready for a galaxy of gore and guffaws with Psycho Goreman.
Pre-Order from Amazon at https://amzn.to/3idBYR1
For your chance to win just answer the question below.

COMPETITION CLOSED
Quick Terms and conditions - For full T&C click here
1. Closing date 11-10-21
2. No alternative prize is available
3. When the competition ends as indicated on this page, any and all entries received after this point will not count and emails blacklisted due to not checking this page first.
4. Winners will be chosen randomly and will be informed via email.
5. Entries that come directly from other websites will not be accepted.
Posted by JD at 10:58