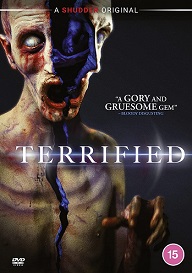 Terrified - Released on DVD and Blu-ray from 13th September
And to celebrate we have a great competition for you and 2 copies on DVD to give away.
Synopsis:
You’ll be Terrified as writer/ director Demián Rugna’s (The Last Gateway, You Don’t Know Who You’re Talking To) nightmare inducing horror makes its UK Blu-ray, DVD and digital debut from Acorn Media International in conjunction with Shudder on 13 September 2021.
Voices in the kitchen, furniture shaking at night, corpses moving seemingly of their own accord… in a quiet suburban street in Buenos Aires, strange occurrences convince the residents that they’re being haunted. Following levitating bodies and murderous threats from an unseen entity, neighbours Clara, Walter and Alicia get together to tackle the problem. But as things get more and more sinister, they start to see how truly dangerous the presence really is.
When a paranormal investigator is brought in, they hope he’ll get to the root of their neighbourhood nightmare… but dark spirits don’t like being disturbed and things take a dark and deadly turn.
Get Terrified, evil is here.
Pre-order on Amazon: https://amzn.to/38G7DFL
For your chance to win just answer the question below.

COMPETITION CLOSED
Terms and conditions
1. Closing date 20-09-21
2. No alternative prize is available
3. When the competition ends as indicated on this page, any and all entries received after this point will not count and emails blacklisted due to not checking this page first.
4. Winners will be chosen randomly and will be informed via email.
5. Entries that come directly from other websites will not be accepted.
Posted by JD at 09:00