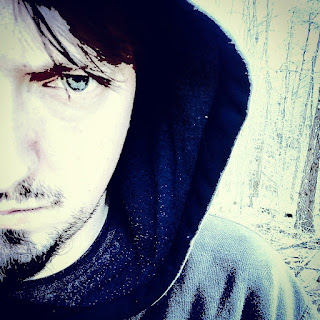 In the fourth grade, I had scribbled outlandish things down prior to that, but in the fourth grade…I was ten I wanna say, but we had our first ever state graded writing test and of course it came with a prompt. It was something to do about summer vacation, a very cliched so I wrote a short story about a haunted house at the end of some derelict street with my friends and our bikes and all of that…pure make-believe, but the graders contacted my teacher and said that not only did I pass, but I entertained them and wanted to thank me for breaking the monotony.

So, after that I was hooked and began writing small tales here and there. It wasn’t anything major, but that was the moment that I felt confident enough to do more scribbling.

As a kid, like every other kid in my age group I started on Hardie..or Hardy…Hardy Boys and although those were cool, they were lacking a whole lot of something, then there was Goosebumps. Something about those dark worlds Stine created, however light and humorous, was marvelous and I found myself needing more of it. Honestly, I think my first Goosebumps book convinced me that I might want to take the writing thing serious, but to take it to a darker level.

I was never huge into fantasy, not high fantasy, I liked The Hobbit as a kid, but the Lord of The Rings trilogy lost me by the middle of the two towers. Now, the Harry Potter books were great, but they had a level darkness that was well crafted. When I got older, I found a huge appreciation for Neil Gaiman, Stardust was a book that made fantasy more digestible for me.

How would you classify the genre you write about?

Multi-Genre. That’s not an easy question, but the Vodou series is supernatural suspense…The Duchess series I’ve embarked on is dark fantasy. I have a new novel, that will be released in serials, I’d say is dark sci-fi. So, all in all, I stay in the realm of horror or at the very least I keep the horror elements there, but I try to drift into layered storytelling and slow burn intrigue. The Vodou series moves fast and punches, but in contrast, The Duchess series is deeper into fantasy mode with mystery and slow burn intrigue.

People like being uncomfortable, they like not knowing what’s next, but what we need is another Jack Ketchum. Dallas had a way of storytelling, however graphic, was driven with a cadence and pushed the boundaries of what the reader could take. Ya know, the good guys die at the end sometimes, bad things happen, not everyone can make it. Before him, no one was really doing that, the hero is supposed to save the girl and stop the bad guy, but not in a Jack Ketchum novel.

I remember when I saw Jeepers Creepers, it had that ending where the good guys lose, Justin Long’s character screaming in torment as the credits roll. I thought it was genius, it wasn’t highly received or praised, but I think we need more of that in books, especially from higher profile authors. The good guys lose in the end and they lose dramatically.

Folklore, or creating my own folklore and add a dash of real events in a way. By the end of the new series, I plan the final book to take place in the lore I’ve created, something about that is appealing to me. I’ll take real events or people from my home town and make real built fiction out of it.

From the authors I’ve read, Catherine McCarthy and Ramsey Campbell for examples, the mood in British horror is more steeped in lore. The descriptors are very different as Brits use adverbs a lot more steadily than the American author, here we’re told to edit them all out, redraft a complete sentence to avoid them if need be. American horror seems to have developed a taste recently for splatterpunk or splattergore, which isn’t my cup of tea. I’ve tried reading some and just can’t get into it.

The Rising series by Brain Keene, Red by Jack Ketchum, Summer of Night by Dan Simmons, Tangerine by Linda Crockett Gray, The Midnight Sun by Ramsey Campbell, anything from Robert McCammon and Sarah Pearse wrote a great book called The Sanatorium.

The Serpent and The Rainbow, Frailty, The Mist was cool and so was 1408, Romero’s Dead series. Dawn of The Dead remake was great and is my favorite remake. The best to me was the first I ever saw at the age of three or four and that was Phantasm. The cemetery scene really messed with me as a kid and when I grew up, I really appreciated the film as a whole.

So far, being featured on the front cover of an anthology (25 Gates of Hell) alongside Brian Keene, Catherine McCarthy Jill Girardi—made me feel like I’ve made it. Probably another was when my first novel, Vodou was a finalist for the Maxy Horror Novel of The Year, because at the time I really didn’t believe that the book would ever see the light of day.

DO NOT READ YOUR REVIEWS! I can’t stress that enough. Reviews are a determent to the writer and they are not written for the writer, but for the consumer and by ingesting them you run the risk of becoming lost in your own fanbase. It takes a hundred 4-5-star reviews to build confidence and a single 1-star review to wreck it, conversely too many 4-5-star reviews and you get too much confidence and set out to write the great American novel only to fall way short of that glory.

My advice is to pick a handful of people you love and who’s opinion matters to you and write for those people, first tell the story you want to tell, not what you think the fans want, don’t pander to the masses, you’ll lose your soul real quick—but to those handful of people, in my case I write for eight people; eight. Those eight people are my judge and jury and sometimes the executioner, so if they’re happy then I’m happy and if they’re not then I work on it until they are. If you operate that way, then the rest of the world’s opinion won’t matter much.

I recommend to write the first draft by hand, if you can, it slows the process down to a point where you think each sentence and you’re still in the phase when you don’t have to get it right, just get it down and when it’s time to get it to the computer, read every sentence out loud and not just recite them, treat your draft like a Broadway production, read the narration like Orson Welles, read the dialogue with intent and dialect, this is the best way to finds flow errors and bad sentences, you’ll rework a whole paragraph like this and this is something I wish I would have known years ago.

It’s great that there is that options and that the author can recoup majority of their money, I think the only issue is that books are being published that shouldn’t be, or they need a lot more work and maybe they were books that were rejected by a lot of other places and the author decided to put it out into the world anyway, believing their work was good enough, when maybe—it wasn’t. I think that’s where the stigma around self-pub is there, the consumer has read too many bad books and most won’t read self-pub for that very reason. We have gate keepers for a reason and with self-pub there is none.

On the other side, it’s a good benefit to those who are great writers that don’t want the hassle of subbing to agents only to wait six to seven months for a reply or to a small press that may fold in a year. It’s all about money at the end of the day and self-pub is the best way to maximize your cash in a fast-tracked time table. (As long as your clutch at marketing!)

Christy Aldridge (These Ghosts Bleed, Seth and Kill, My Darlings)

Edward Lorn (Cruelty, Bay’s End and The Sound of Broken Ribs) – (these are brutal)

Last, a non-horror book, but a book I love:

V.F Sharp (The Forest of Arrows)

The third installment of the Vodou series has been pushed back till October. I’m in the middle of a commissioned short piece about zombies, that’s a new topic for me. I’m deep into a three-book series, with extensive work done to all three, but it’s a dark fantasy series called The Duchess and I’m about to launch the first part of a serial novel called Serum, with part one titled, The Death of Pine Street.

My name is Brandon Scott and I’m an Active Member of the Horror Writers Association. I live in the mountains of North Carolina. I spend my free time hiking in the Linville Gorge, playing golf and running around thrift stores. I use to play guitar in a punk band or two back in the day. Now, I collect old and odd books, antiques and Funko Pops! (weird, I know!)

My work crosses several genres, I’m labeled as a Horror Writer, but I’m more into Supernatural Suspense and Dark Sci-Fi, the horror elements are there, but I’m into slow burn intrigue and character development. Although I’ve written some gory scenes, (the short story, A Child’s Game and soon Carnival Fantasmagoria, Book 3 of the Vodou series.) I choose to stay away from Splatter Punk or Gore outright, unless it serves the story’s plot, which in my usual case, it won’t. Neither will over the top sex scenes. I think my work fits in most people’s comfort zones and is paced enough to keep the reader engaged. 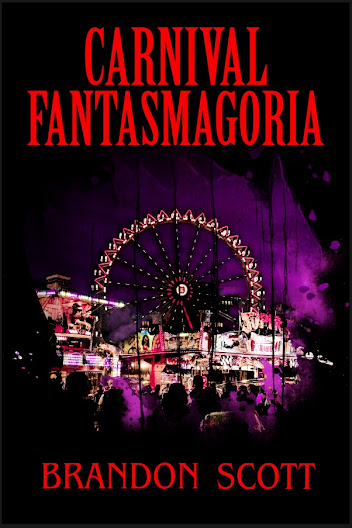