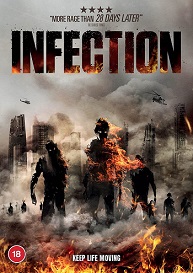 Infection - Released from 18th October
And to celebrate we have a great competition for you 3 copies on DVD to give away.
Synopsis:
A mutated variant of the rabies virus is rampant in Venezuela. Once infected, the afflicted turn into bloodthirsty monsters who spread the disease everywhere.
In a rural town lives a recently widowed doctor, Adam, whose son is on vacation at his grandparents. As news of the epidemic reaches their small town, Adam, and his neighbour, set out on a perilous journey through the devastated country in search of his son.
Produced before the outbreak of Covid 19, INFECTION received its world premiere at Sitges and has since screened at over 20 festivals worldwide including Festival of Fear in Canada where it won Best Foreign Film and Panama Horror Film Festival where it won Best Film. Raindance hosted the UK premiere followed by screenings at Cine-Excess in Birmingham and Dublin Horrorthon in Ireland.
Pre-Order from Amazon at https://amzn.to/3axu7JH
For your chance to win just answer the question below.

COMPETITION CLOSED
Quick Terms and conditions - For full T&C click here
1. Closing date 25-10-21
2. No alternative prize is available
3. When the competition ends as indicated on this page, any and all entries received after this point will not count and emails blacklisted due to not checking this page first.
4. Winners will be chosen randomly and will be informed via email.
5. Entries that come directly from other websites will not be accepted.
Posted by JD at 10:02