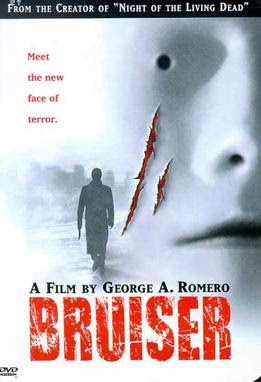 Bruiser is a 2000 French horror-thriller film written and directed by George A. Romero and starring Jason Flemyng, Peter Stormare and Leslie Hope.

You can also buy to keep from Amazon at https://amzn.to/3iT2hMM

The young executive of a publicity agency Henry Creedlow is a man that has repressed morbid thoughts and is walked over by most of his acquaintances: his wife is cheating on him with his boss and stealing his investments with help from his best friend; his housemaid is frequently stealing from his house and insulting him in Spanish; even his annoying poodle does not respect him. While in his daily morning routine listening to a talk show on the radio, he hears a man committing suicide live because he had been felt miserable and disrespected for a long time, and Henry feels impressed with the tragic story. The next morning, he wakes up to find his face covered by a white mask, changing his personality and letting him seek revenge against those who have humiliated him.