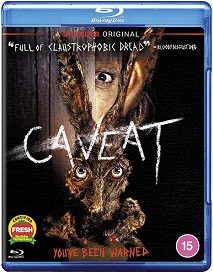 Caveat  - Released from 28th February
And to celebrate we have a great competition for you and 3 copies on Bluray to give away.
Synopsis:
Damian Mc Carthy makes his dramatic directorial debut with the ‘impressive and often terrifying’ (The Guardian) Caveat, a Shudder Exclusive set for its UK Blu-ray debut from Acorn Media International on 28 February 2022. It will also be available on DVD and digital.
Amnesiac drifter Isaac (Jonathan French – A Soldier’s Voice, The Anniversary) struggles to recall his recent past after a traumatic event, but shifty ‘friend’ Barret (Ben Caplan – Murder on the Orient Express, Ghostbusters) offers to help him back on his feet with a profitable babysitting job. All he has to do is look after his adult niece (Leila Sykes – Missing Something, Lancaster Skies).
But there is a Caveat: The isolated house is plagued by a gruesome past which has left Olga psychologically disturbed, andIsaac must wear a leather harness and chain restricting his movement to certain rooms.
Once in the harness and left alone with Olga, a terrifying game of cat and mouse ensues, and Isaac must fight for survival amid the unsettling resurgence of his own memories. Can Isaac piece the fragments together before it’s too late?
A Caveat for viewers: there’s deeply unsettling forces at work in this eerie and evocative nightmare-fuelled feature.
Pre-Order from Amazon at https://amzn.to/36mTrDr
For your chance to win just answer the question below.

COMPETITION CLOSED
Quick Terms and conditions - For full T&C click here
1. Closing date 07-03-22
2. No alternative prize is available
3. When the competition ends as indicated on this page, any and all entries received after this point will not count and emails blacklisted due to not checking this page first.
4. Winners will be chosen randomly and will be informed via email.
5. Entries that come directly from other websites will not be accepted.
Posted by JD at 11:05