COMPETITION: Win Shepherd on Blu-ray, plus an exclusive T-Shirt 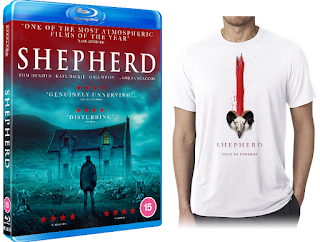 Shepherd - Released from 21st February
And to celebrate we have a great competition for you and 3 copies on Bluray and 3 Exclusive T-Shirts to give away.
Synopsis:
British horror film Shepherd from Darkland Distribution will be released on Blu-ray and Digital Download from 21st February.  Shepherd stars Tom Hughes (Red Joan, Victoria), Kate Dickie (Game of Thrones, The Witch), Gaia Weiss (Vikings, Medici) & Greta Scacchi (The Player) and is directed by Russell Owen.
Since its Premiere at BFI London Film Festival and its theatrical release in November, critics have heaped praise on the British independent title.  Total Film described the film as a "disturbing watch" with "truly nightmarish" visual effects, Starburst called it a "brooding, bleak, atmospheric nightmare that grips with ease" and SciFiNow reviewed it as a "physiological horror that hauntingly portrays the madness of isolation with striking visual clarity" and "not for the faint hearted."
Film critic Mark Kermode was also full of praise for the film, awarding it his 'Film of the Week' on his Radio 5: Live Show, lauding Kate Dickie's 'fantastic' performance and the 'eerie' atmopshere created by filmmaker Russell Owen; "...you can feel the cold, you can feel the lonliness, you can smell the air of the island."
Running from grief after the mysterious death of his wife, Eric Black (Tom Hughes) takes a job as a shepherd. Trapped alone on a majestic weather-beaten island with an ominous secret. One man's spiralling madness meets a vengeful supernatural force. What starts as the perfect wind-swept escape becomes a race to save his sanity and his life.
Shepherd will be available on Blu-ray and Digital Download from 21st February
Pre-Order from Amazon at https://amzn.to/3oPfMjD
For your chance to win just answer the question below.
COMPETITION CLOSED
Quick Terms and conditions - For full T&C click here
1. Closing date 28-02-22
2. No alternative prize is available
3. When the competition ends as indicated on this page, any and all entries received after this point will not count and emails blacklisted due to not checking this page first.
4. Winners will be chosen randomly and will be informed via email.
5. Entries that come directly from other websites will not be accepted.
Posted by JD at 13:11