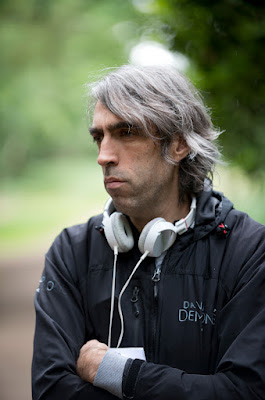 Ahead of Horror Channel’s UK TV Premiere of PERIPHERAL, director Paul Hyett talks about directorial ambitions, twisted technology, and why aliens aren’t interested in us.

How did you become attached to Peripheral?
The producer Craig Touhy and I had been friends for a while and we’d nearly done another movie together. He’d liked the claustrophobia and tension of The Seasoning House so we met up to discuss Peripheral. When he pitched it to me, very much a low budget, contained movie, in one apartment. I must say I was a little hesitant. I wanted to broaden my directing and do bigger scope. Craig persuaded me to at least read it. I did and loved the script. The story, the character of Bobbi, of this writer blocked, being forced to adjust to what is wanted of her, and having to succumb to a technology that ultimately fucks her in so many ways and being forced to write for a corporation that she hates. It all felt so very relevant.

Was the cast already in place and what’s it like directing legends such as Jenny Seagrove and Tom Conti?
No we cast from the ground up, Jenny Seagrove was the first cast, I was so happy we got her. She loved the script and the character of Merlock. She was an absolute joy, so professional, so excellent and willing to discuss everything

The film looks incredible, did you have much budget to play with?
No, it was soo low budget. But we were lucky, we had a great DOP, Peter Taylor who is Ridley Scott’s camera operator of choice. He shot it so beautifully. And in general we had a great crew, all the departments really did great work to make the budget look a lot more then it was.

It’s a very technical movie, was it a tough shoot?
No, not compared to Howl or The Seasoning House. It was nice to be able to concentrate on the drama and performances

There is a conspiracy element to the story, do you have a favourite conspiracy theory?
Yeah but to be honest, I will keep those to myself as they could cause offence. Although I do believe aliens have visited and thought we were too backward to bother with.

Do you think there will be a time when AI does take control?
I think technology will continue and AI is going to be a very valuable tool. Do I think it will ever take control as per Skynet, no. Technology will slow down. There’s only so much space on a computer chip. Even with nanotechnology there needs to be a breakthrough in how technology can be furthered without it being made in the current methodology. It would need to be something organic, like biological mechanics. 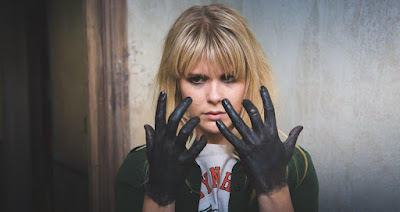 It’s very different to other movies you’ve directed, is this a deliberate choice?
Yeah I try to diversify as much as I can. I like to try to do something different each time. I can’t see the point in repeating the same thing over and over.

How does it feel that it’s having its UK TV premiere on Horror and how would you describe it to our audience?
I am so happy for Peripheral to land on the Horror Channel. It will hit a whole new audience. I would describr it as a fusion of reality and fantasy, whereas an isolated writer faces a bizarre and surrealistic predicament against incomprehensible socio-bureaucratic powers with shades of Cronenberg and Demon Seed.

All your movies have a distinct British edge to them, would you agree?
Yes I would agree with that.

You’re a multi-talented creative, you have one job you prefer above all others?
Very kind of you. I love directing more than anything. Its way above anything I’ve done, and more satisfying and soul crushing than anything I’ve ever done.

So, what are you up to at the moment?
I have a few projects in development. The Black Site, a gritty war-horror with Grimmfest Films. I’m also developing a project with Balagan Productions. a revisionist take on the afterlife and our perceptions of it, and Unnatural Selection, a Carpenteresque new England horror. All very different, all in different stages of development
Paul Hyett, thank you very much. PERIPHERAL will be broadcast on Horror Channel on Sunday Feb 20, 11.05pm. 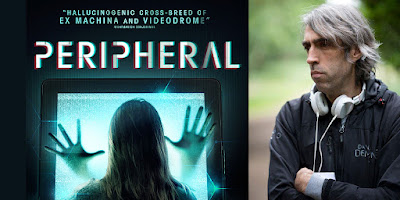