COMPETITION: Win The Incarnation on DVD 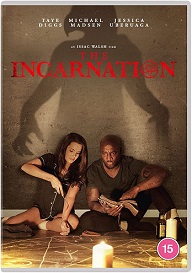 The Incarnation - Released from 21st March
And to celebrate we have a great competition for you and 2 copies on DVD to give away.
Synopsis:
Hollywood stalwart Michel Madsen (Reservoir Dogs, The Hateful Eight) stars alongside Taye Diggs (Empire, Chicago) and Jessica Uberuaga (Take Back, Vigilante Diaries) in The Incarnation, a wickedly dark, twisted tale of greed and evil.
This devilish horror based on the legendary demon Mammon from Isaac Walsh in his directorial debut, gets its UK premiere on DVD and digital this March courtesy of 101 Films.
Struggling young couple Brad (Taye Diggs) and Jess (Jessica Uberuaga) move to LA In search of a better life. When they stumble across the perfect property, they seize it with both hands, and their luck begins to change… but is it too good to be true?
With their fortunes taking a miraculous turn, their thirst for success and riches cannot be quenched… but they soon learn that greed comes at a hefty price.
It becomes increasingly apparent that behind the seemingly luxurious walls lurks something deadly… An ancient evil that will stop at nothing to get what it wants…
And the American dream descends into an unimaginable nightmare.
Pre-Order from Amazon at https://amzn.to/3KIfa7K
For your chance to win just answer the question below.

Who plays Brad in The Incarnation?
Send your name, address and of course the answer to competition365@outlook.com
Quick Terms and conditions - For full T&C click here
1. Closing date 28-03-22
2. No alternative prize is available
3. When the competition ends as indicated on this page, any and all entries received after this point will not count and emails blacklisted due to not checking this page first.
4. Winners will be chosen randomly and will be informed via email.
5. Entries that come directly from other websites will not be accepted.
Posted by JD at 10:53