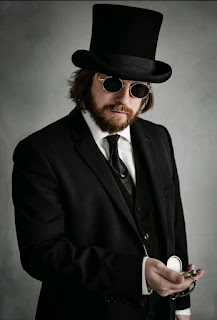 When did you first become interested in writing?
I’ve been interested in crafting stories and worlds since I was very young David. It’s probably a well-known story now but my father would have taken me to the local library. There was one writer whose work I continually sought out, John Peel. John wrote several Doctor Who novelizations, his richness of language and immersive world building often encouraged my imagination. I would find myself sitting at the kitchen table constructing stories about Doctor Who, Dinosaurs and Vampires. As I disclose this, I realize how, now I am almost 40, that everything has come full circle! This love of writing was then rekindled when I was mentored by the creator of 2000AD Pat Mills in 2017. He encouraged me to continue to explore the craft and I started writing some Judge Dredd stories and progressed from there. As an aside, I was lucky enough to write a Dracula novel with the aforementioned John Peel last year. It was entitled ‘Dracula’s Bedlam’.

How did you get involved with Fantasy/Horror?
The love of both came from childhood cartoons. I grew up with Thundercats, Dungeons and Dragons and Ghostbusters. These all had fantasy and horror motifs. Later I became a fan of Doctor Who and I do have a very distinct memory of reading Dracula when I was seven years old. Vampiric imagery fascinated me growing up. It’s a very Irish myth, the vampire, a lot of vampirologists miss that. We have the creatures that emerge from the bogs, Carmilla was the creation of an Irish writer, Sheridan Le Fanu. Growing up I was steeped in the old stories and myths of the old Irish world, kings and demons fighting with sword and claw. I think that is a very deep ancestral connection to Fantasy and Horror. I started writing these genres a few years ago, Horror with several US published comic books featuring werewolves, mummies and of course Dracula. I crafted a fantasy universe with Claudia Christian (the Babylon 5 actress) and we have several titles being released in that range this year across various media.

How would you classify the genre you write?
That’s actually difficult, I have touched detective stories with Alfred Hitchcock Presents, Fantasy, Cosmic Horror, Science Fiction…Perhaps it would be more accurate to say that I write about the grotesque. I’m extremely comfortable with that. There’s something that transfixes me about the disturbing aspects of humanity, flukes and magnified flaws. Is there a genre that describes looking unwavering at your own soul and using its perceived failings to craft characters? I’m not sure but I think that’s what I do. An equal amount of self-realization and projection.

Please tell us about your work with video games.
It all started when I began to write games, by that I mean I was coding them in C# and C++. I was employed to do that by various companies. I worked on code, animation, visual design and even 3D artwork. I was in the trenches so you learn to become proficient at many aspects of crafting a game that way. My first work on game narrative was with Tiny Rebel Games and their Doctor Who Legacy mobile game. I scripted some of the dialogue and scenarios. I moved on from that and worked on attempting to craft a cohesive narrative for Bioware’s Anthem title. That was difficult as the game had already shipped. I managed to help create a more engaging introduction but I think the studio knew that it was too late. The audience for the game had disappeared. In the last few years, I’ve worked with retrogames for an amazing cloud-based Arcade company Antstream which is taking the industry by storm and now am employed by Amazon Games as lead narrative designer to work on several franchise titles for games being release on Web 3.0. Also, I mustn’t forget that I am working on a Dracula video game as a narrative consultant (with my wonderful business partner Dacre Stoker)

Why do you think Horror and Fantasy Books remain so popular?
They tap into powerful escapism and a unique way of using imagination. The possibilities offered by each genre are endless. There’s also the ability to discuss many sensitive issues within the framework of these genres and also be entertained.

Why do you think the vampire myth, particularly Dracula remains so popular?
Why was the Horus myth for the Egyptians popular? Or the Vampiric Aset Ka- who was a form of Isis? They tap into something primal which we have never forgotten. The early Judeo-Christian texts forbid the drinking of blood for example yet the established Christian church approves of it (in a symbolic fashion). Tradition in some cultures (including the ancient Irish) thought that by drinking blood you would extend your natural life. For the Dracula myth it’s the thumbing the nose at traditional religion, desire to live forever and (thanks to the movie interpretations) sex.

What Inspires your stories?
Thoughts that pop up in my head. Powerful imagery from art books. Poor films that I rewrite to make better. The desire to create something that people enjoy and remember fondly.

What do you think the difference between American horror and British horror is?
Pushing boundaries and cultural context. American horror generally seems more comfortable with graphic nature of horror. British horror is very comfortable in the traditional gothic tale, the art of suggestion. That’s a terrible generalization and I think now there’s more of a blurring of that.

What are your favourite horror books?
I would be in trouble if I didn’t say Dracula. Honestly, I think that was the first horror novel I read. James Herberts Rats, Candace Nolan’s Bishop, Elizabeth Massey, Jeff Strand and Clive Masterson’s works. Anything that makes me pause or gives a powerful sense of dread or situation.

What are some of your favourite horror movies?
Terminator – the first two films, that sense of relentlessness and the dark side of technology. American Werewolf in London for atmosphere, humor and amazing special effects. Anything Hammer or that has Vincent Price in it. The actors and their presence really make the film at times. My friends Claudia Christina and Bruce Campbell would be upset if I didn’t mention Maniac Cop or Evil Dead – they are fun, Schlocky horror films I watched as a kid.

What would you consider your greatest accomplishment as an author?
People reaching out to me and telling me they had a good time when reading my work. Primarily I am writing for entertainment.

Do you have any advice for new writers?
Never be afraid to reach out to your heroes to seek guidance and inspiration. Most authors want to help others find their path. I am a mentor in the Horror Writers Association and I know from experience that established writers want to help up and coming talent. Never be afraid of ‘failure’, its part of the process. Don’t look back too critically on your previous work, but remember fondly the experiences you had when writing it.

What is your opinion of the new self-publishing trend?
If it works for the author – go for it. As for myself, I know I need a good editor for my work and have always found that the publishers I work with to be helpful in this regard. If you are self-publishing make sure you have a good marketing plan. Readership needs to know that your work exists!

What are your current projects?
Working on the Terminator franchise in gaming and in prose, managing several StokerVerse game and comic book projects. Writing Doctor Who stories for anthologies … To be honest there’s so many things going on. I’m also a submission editor for Crystal Lake Publishing and editor of The Horror Tree magazine as well as technical editor for game programming books from O’Reilly publishing.

A Paragraph about my work
I am a writer of graphic novels, audios, novels, short stories, tabletop RPG’s, board and video games. I work in several franchises such as Terminator and Doctor Who. I’ve been partnered with Legendary Disney Imagineer Teri Hardin Jackson for Star Wars narratives; we also did a Batman comic together. I co-created the StokerVerse with Dacre Stoker and Dark Universes, a science fiction franchise with Babylon 5 actress Claudia Christian. My style is mostly visceral and I’m a plotter not a pantser!
Posted by JD at 10:02