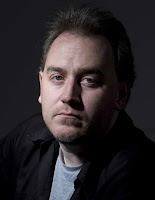 On the eve of the UK TV premiere of THE DEVIL’S BUSINESS on Horror Channel, Sean Hogan talks about the future of the horror film industry, the importance of a good script and his forthcoming doc on the UK comic 2000AD.

Q:  How did The Devil’s Business come together?

SH: I’d been waiting a long time for another project to come together, and out of sheer frustration, I had a meeting with my producer Jen Handorf one night and proposed that we made something for very little money, just to get back in the saddle. I’d recently seen Down Terrace and really liked it, and my feeling was that you didn’t need a whole lot of money to make something, just a good script, talented actors and one location. So I sat down and wrote Devil’s Business to be done along those lines. What happened then was, the other project finally happened, but turned out to be a nightmare experience. So once the dust had settled, I really needed to wash the bad taste out of my mouth. So Jen proposed we went back to The Devil’s Business. It came together really quickly after that, we basically pulled it all together in a few months.

Q: Did the script take long to write?

SH: Not really. It was short, for one thing! And I was kind of on a roll when I wrote it; I’d written about five scripts already that year so the gears were well oiled. Besides, it really was one of those times where the characters took over and wrote themselves – it always sounds horribly pretentious when writers say that, but what can I tell you, it’s true! I normally outline much more than I did on Devil’s Business, but in this instance I just sat down and started writing with only a vague sense of what was going to happen. For instance, when I wrote Pinner’s monologue, I didn’t really know what he was going to say or how it would impact the rest of the film; all I knew was that he was going to tell a strange story. And it all just came flooding out. It certainly isn’t always that simple, so I have fond memories of writing it.

Q: Was it a hard movie to cast?

SH: No, we were fairly lucky in that department. We didn’t have a casting director, so it was largely a case of me and Jen scouring Spotlight and looking at showreels etc. That was how we found Billy Clarke, who played Pinner. He was the first person who read for the part and I just loved him immediately. Johnny Hansler was someone I’d auditioned for another film – he wasn’t right for that part but I made a note that if we ever did Devil’s he’d be great for Mr Kist, so we just made him an offer based on that. And Jack Gordon was a recommendation via his agency, who Jen had a working relationship with. Again, he just came in and rocked the audition. Easiest casting process I’ve ever had, despite the lack of resources.

Q: How did you go about funding for the film?

SH: It was private money. We wanted to control the production ourselves - because we’d had enough of meddling, crooked, incompetent executives – so Jen and I invested some money to get things going. And then we approached some other people we knew to kick in some cash as well. We knew that if we tried to get it made through official industry channels it would take forever and we’d have to put up with a ton of less-than-helpful script notes, so we made a decision we’d just do it our way – for less money, but with more control. It was hard work doing it on the budget, but the actual experience of doing it with no outside interference was sheer bliss.
. 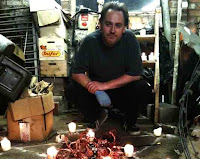 Q: The film picked up some great reviews including one that stated “…smart British horror has a touch of the Roald Dahl to it” that’s quite a compliment.

SH: We were very happy with the response, without a doubt. From my perspective, I had no idea how the film would be received; it was just cathartic to make it. I figured that it was such a small production that it might easily disappear without a trace. And besides, it isn’t really a conventional horror film in many ways; it’s quite dialogue-driven and character-based, which always puts some people off. So I was definitely steeling myself for the worst. But then we premiered it at FrightFest and got wonderful reviews, and it went on from there. So I was delighted – I’ve had bad luck with UK distribution in the past, so to get that sort of a reaction was very rewarding. And it definitely made everyone’s hard work worth it.

Q: You must be pleased that the film is getting its UK TV premiere on the Horror Channel?

SH: Certainly am. Again, if you’d said to me when we were shooting it that the film would eventually play cinemas, come out on DVD and then show on TV, I’d have probably asked you what you were on and where could I get some. The Horror Channel has been very supportive of me and so I’m really pleased we’ve found a home here.

Q: What state do you think the British horror movie industry is in?

SH: It’s very tough, certainly at an independent level. DVD sales are down and whilst I think VOD will eventually take up the slack, it isn’t there yet. But horror is reliant on those sorts of areas to make it viable. So you get a lot of distributors asking you to make something along the lines of what was successful last year. Which I hate hearing, not least because that never works. I’ve certainly been asked to make something similar to Kill List, for instance. But Kill List was successful because it wasn’t like anything else at the time, and if you just try and copy that, the audience will smell it a mile off. And anyway, we kept getting compared to Kill List anyway, so why would I want to do that again? I honestly think a lot of it comes down to a lack of respect for the genre; a lot of industry people just see it as product and not worth any serious consideration. Therefore you get a lot of crap being made, just because it ticks certain commercial boxes. And so if you want to do something different, you run into difficulty. But there are definitely good UK filmmakers out there, so I just hope that everyone keeps plugging away and making films one way or another. Because if history shows us anything, it’s that good horror usually comes out of the independent sector anyway.

Q: What advice would you give to anyone wanting to become a director or work in the horror industry?

SH: It’s obvious, but my primary point is always to pay attention to your script. The writing really isn’t worth a damn in most horror films. And yet it costs no money to get your characters and dialogue written properly. So if you can’t write, find someone who can. Similarly, cast good actors – they may not be famous names, but you can certainly find people who can act. Trust me, it’s easy if the script is good – actors are desperate for quality material. Don’t make something that’s just by the numbers – we’ve all seen the classic horror films, doesn’t mean we want to see slavish copies/homages. Figure out what really scares you and put it onscreen – because if it scares you then odds are it will scare someone else. And for god’s sake yes, please try and be scary. Rape and torture are not scary, and I’m so incredibly bored with how much of that we’re seeing right now. It’s easy to be upsetting, but it’s not easy to be scary.

Q: So what are you working on at the moment?

SH: Jen and I are developing a script called No Man’s Land, which is a horror movie set in the trenches of WWI. We’ve had a lot of interest over that, so I’m hopeful we can get that going this year. I’m attached to a bunch of other projects as well, but that’s where I’m focusing right now. I’m also producing a documentary called Future Shock!, which tells the story of the legendary UK comic 2000AD. That’s proving to be a lot of fun, and the response to us making it has been great. That should be ready sometime next year.

Sean Hogan, thank you very much.