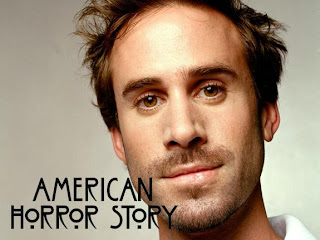 Q: How do you find this particular voice for this character that you play?

A: He's a fun character as are all the characters in American Horror Story.  The monsignor, just the name itself has this sort of regality to it.  He's been brought in probably by the diocese to run this new asylum and sister Jude in charge.  So the man is wonderfully versed in theology and church and I imagine is very well educated, possibly University. Ultimately he's very ambitious.  He studies a lot.  I also think that he is a moderate voice of the church.  Around that time in the 60s it may even have been a movement called the Vatican II, which was the whole idea of challenging the Vatican and really getting it to modernize itself with its attitudes towards the people of that time in the modern age.  That still continues today.  He's a man that both is intelligent but also manages to think outside of the dogma and the theological box of the Catholic Church.

Q:  Why is it an interesting juxtaposition to see a show that's set in the 60s because we have this fuzzy nostalgic view of that decade?  Does it apply to we are today?

A: It depends who you ask, those who were born in the 30s, 40s, that lived through the 60s and their sort of adolescence and adulthood, would obviously have a very different point of view.  Of course from the 50s to the 60s a huge explosion with music, the Beatles, the Stones and a great escape from the repression.  Those characters that are of a particular age within American Horror Story in the 60s would've been children of the 30s and 40s and would have been brought up with a pretty strict regime certainly in Europe.

And certainly in North America.  What's brilliantly creepy about the show is the fact that this wasn't so far away.  This wasn't so many years ago that people have such a particular rule and answer to the crimes that someone committed, whether it was just stealing or something worse or just someone who was not mental but possibly just a bit passionate or outspoken.  Then of course someone who was gay and how that was viewed at that time.

We've come a long way but maybe that's just in North America.  I'm sure there are other pockets of the world we live in a culture deeply repressed.  The great thing about the Internet is that people can at least log on and hold hands with like-minded people or democratically minded people.  But I don't think we should forget that, I think those horrors, in their own way, in a modern world, may still continue.  We all know that and I think we all know that somehow the greater powers -- we're so close.  Whether we're liberal we might believe we are in a police state or something.

Very quickly you can be on the wrong side of the law or very quickly you can hit a moment of madness and so I guess it's all about perception.  It's very different today than then but I don't think it was so far away and I do think there are pockets in which have characters like that that have authority figures that are in charge.  What's wonderful about Jessica Lange's portrayal is that she is someone who is on a righteous course and is doing it for the sanctity of others but in a very brutal way.  That goes on today in all walks of sort of authority.

Q: This is a show that lives in a very grave moral zone.  The show pushes the boundaries of what mainstream television should talk about.  Do you find that it has a very interesting morality as a result?

A: First and foremost, this is great exhilarating entertainment.  It plays with all those wonderful themes of horrors and it takes all the great sort of juicy films in our repertoire with the Shining, Psycho, Hannibal Lecter.  There's all sort of borrowed components and references so it's wonderfully exciting for that genre.  It is creepy and because there is a connection to these characters that are fallible.  That is the main draw over and above the horror.

The great connectedness is that they contradict themselves.  They're full of contradictions as we discussed earlier.  No one is who they seem to be in that kind of who we are and we're always trying to find our real selves and we wear masks and we pull it off.  And I think there's, to the greater extreme, that's what's taking place here whether it's people within authority or within the mental institution itself you know.  What I love about this show is its meditation on sanity and those who are locked up are probably more sane than those running the asylum.

That's a lovely kind of juxtaposition.  But ultimately within the extreme these people are real.  The only person for me who really is an out and out monster is Dr. Arden.  I find him really very scary, a child of a brutal regime and his sort of brainwashed and I kind of can't really see if he's got any moral center at all.  I find that particularly scary.  But really what I find scary is those who do have moral centers and veer off to their great cost.

Q: You're bloody face, aren't you?

A: This is now terminated.