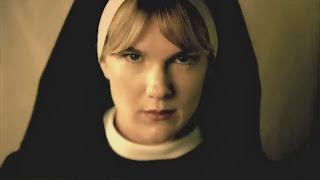 
Q: I'm very Catholic and this show scares the crap out of me.  How was the show first presented to you?

A: When Ryan called me up I was doing a play in New York and I remember I was sitting in my dressing room before a show, he called to tell me about the new season and the part that he wanted me to play.  I said yes before I knew much at all because getting to work with Ryan is something I say yes to.  I trust him.  So I didn't know that much.  I knew a bit about the character I'd be playing and I knew the time period and I knew it would be in an asylum and I knew what Jessica was playing.  But the information came in in bits.

Q:  What is it about this particular show that has galvanized audiences the way that it has?

A: Well, that's part of it, it's not like anything else on television.  What Ryan does with all of his shows, which are so incredibly different from one another, it's just amazing that these three different shows that are on the air right now are born out of the same brain and are so incredibly different.  What they all -- they're all very original, very brave and each universe that he creates the show is its own universe. So for an audience member at least for me watching his shows, to get to sort of step into that world that is so specific to the show is I think very appealing.  And can appeal to so many different, that's why there's so many, it's not just for targeted age groups, there's vast mass of appeal to his shows I think.

Q: For an actor, what is the best part about living in a world that's so grey?

A: Wow, that is where everything happens isn't it, in the grey.  I feel that that's sort of where, certainly where we are today.  As an actor because it's true, and for my character so much is in the middle because so much is happening to her and so it's not black or white.  Is it this Mary Eunice or that Mary Eunice?  All of it is living inside of her and is very complicated way.  And for all of the characters you know we are all -- he writes and creates and his writers create such multidimensional characters.  No one is ever stuck sort of with a caricature.  That grayness is a good place to go to work everyday.

Q: Would you say that insanity is overrated?  Do embrace the responsibility wholeheartedly?  Do you ever question some of the motivation of the characters?

A: No, I don't question them because that wouldn't help me while I'm playing the part you know.  It's bad when you step into that, for me anyway, no, I would find no value in sort of being resistant or questioning what's happening in the world of the show or what's happening for my character.  It's much more fun.   I'd rather just jump out of the plane and then know that my parachute is going to be there.  Too much trepidation with my work.  I can only speak for myself, it has never made me as happy as when I just jump in.  So that's what I'm doing.

Q: How do you decompress at the end of the day?

A: I do love a cheeseburger but sleep is a good thing.  We work long hours.  I think we all like to just try and sleep when we can.  Then you do the things that you do in your life that you know feel like you are living your life outside of work.  She's on my mind 24/7 right now, that's for sure.