From Thursday Feb 27 to Sunday March 2, the UK ’s favourite horror fantasy festival returns to its second home at the Glasgow Film Festival for the 9th year with an impressive slate of the hottest new horror films. 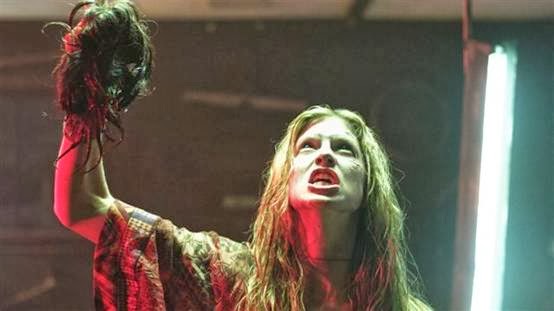 Some of FrightFest’s favourite filmmakers take centre-stage this year, including Ti West, who has teamed up with producer Eli Roth for the cult of the damned shocker THE SACRAMENT. As well as screening the film, FrightFest’s Alan Jones will be talking to Ti at a special presentation on Thursday February 27 at the GFT Screen 2.

FrightFest also welcomes director Jake West and producer Marc Morris, who will be  introducing the world premiere of VIDEO NASTIES: DRACONIAN DAYS, their sequel to the critically acclaimed VIDEO NASTIES: MORAL PANIC, CENSORSHIP & VIDEOTAPE documentary. It promises to provide even more engaging knowledge and sobering insight into the heinous blot on 1980s film culture. The screening will be followed by a (no doubt) lively panel discussion.

FrightFest is also hosting the world premiere of THE SCRIBBLER, based on Dan Shaffer’s bestselling graphic novel featuring a super-hot cast. Director John Suits, producer of CHEAP THRILLS, will be in attendance.

As will Jordan Barker, director of the terrific sucker punch home invasion chiller TORMENT, starring Katharine Isabelle, which will receive its European premiere,

Also attending is Indiana writer/director Zack Parker, with the UK premiere of his extraordinary film PROXY, a daring and highly original chiller. Parker has slowly been building a following with INEXCHANGE, QUENCH and SCALENE and will be flying in from the USA to talk about his burgeoning career.

Other UK premieres on show are the bigger and wickeder WOLF CREEK 2 and KILLERS, a dark, twisted tale from the Mo Brothers duo of Kimo Stamboel and Timo Tjahjanto.  Then there are two highly impressive feature debuts - Cliff Prowse and Derek Lee’s AFFLICTED, a clever spin on the found-footage trend and Spanish director Jorge Dorado’s probing, twisty MINDSCAPE starring Mark Strong.

Plus there are Scottish premieres for the Sci-fi shocker ALMOST HUMAN directed by Joe Begos and director Michael S. Ojeda’s provocative and compelling SAVAGED. 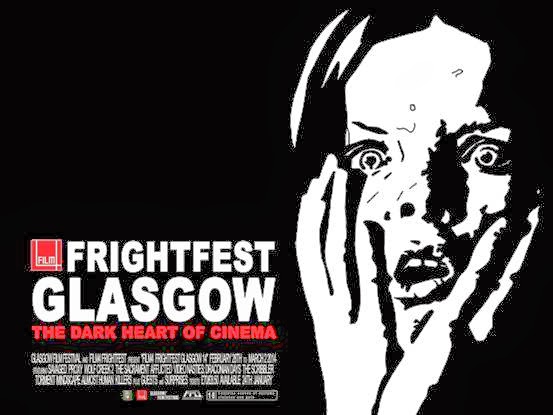 Alan Jones, co-director, said today: “Connections and detections. That’s what Film4 FrightFest is essentially about at its core and it’s the prime focus of our ninth event at this year’s Glasgow Film Festival. It’s our epic fifteenth year in business as the UK ’s leading horror fantasy festival and in that time we’ve launched a number of now well-known talents on the genre scene. So we thought it entirely appropriate to celebrate that fact at our much-loved Scottish home with a host of films from those filmmakers we have discovered, encouraged and promoted throughout the years”.

With surprises on screen and off, and the festival’s unique community feeling, FrightFest at the GFF has now become a must-attend occasion on the horror fantasy fan's calendar.

Nobody does nostalgia-brushed spookiness and minimalist horror like independent director Ti West, King of the slow-burn shocker. FrightFest has been there from the very start – our video label released his 2005 debut feature THE ROOST – and we’ve watched with pride as the Delaware-born quirky talent has grown in global genre stature through THE HOUSE OF THE DEVIL, THE INNKEEPERS, V/H/S and now his game-changing Eli Roth produced THE SACRAMENT. Join us for this very special FrightFest event in which West will talk candidly to film critic and author Alan Jones about his extraordinary career, his influences and exciting future plans.

THE CROW meets I SPIT ON YOUR GRAVE in a viciously gory supernatural shocker. Travelling across country to be with her fiancé, deaf mute Zoe (the entrancing Amanda Adrienne) stumbles on a horrific crime. Zoe’s brave attempt to intervene seals her fate; she's brutalized and left for dead. When an Indian shaman finds her clinging to life in a shallow grave he attempts to save her – but in the mystical process the spirit of an ancient Apache warrior enters her corpse hell-bent on revenge. But can she slaughter the men who attacked her in time before her body decomposes completely?

Attacked and beaten by a hooded assailant after seeing her gynaecologist, pregnant Esther seeks consolation in a support group where she meets Melanie, a mother who lost a child. But nothing is as it appears in this intensely gripping chiller because one of these damaged women is a psychodrama queen, the other seriously deranged. However, which one is which and where to draw the line? Friendship and empathy between the two turns dangerous for both in an astonishing delve into perverse psychosis that’s part Brian de Palma, part Lars Von Trier, part MARTYRS yet all astonishing and disturbing original.

Mick Taylor is back with a few days to kill! Bolder, gorier and placed on a far bigger canvas than the original Ozploitation classic, star John Jarratt and director Greg McLean return with an even more twisted sequel that maintains the savagery and nerve-jangling tension, while dazzling further with a spectacular and surprising use of Down Under landscapes and fauna. Two arrogant cops, two unwitting German backpackers and a Good Samaritan British tourist become the prey for the crazed pig-shooting psycho as the outback becomes drenched in rivers of blood and his underground lair reveals even sicker secrets.

From the darkest imagination of indie poster boy Ti West, and produced by genre guru Eli Roth, comes THE HOUSE OF THE DEVIL director’s freakiest chiller so far. Two reporters with a TV exposé show travel to a secret para-religious group to meet up with their fashion photographer friend’s sister, a reformed junkie, who credits turning her life around at the jungle-set Eden Parish commune run by the charismatic Father. Is the place a paradise on Earth free of cares, racism and stress? Or is it a sinister cult the news duo suspect? Hold on tight for suspenseful, jolting surprise.

Just when you’d thought the ‘found footage’ trend had snatched its final breath...up pops another stellar example to expose there still is untapped craftsmanship and creativity to be found in this fear-inducing format. The winner of the Best Special

Effects Award at the Sitges Fantasy Festival for its jaw-dropping visuals, two best friends see their world trip of a lifetime take a dark turn when one is struck by a mysterious illness that changes his metabolism making him superhuman. A clever spin on a classic scary story, dual-threat Cliff Prowse and Derek Lee make an impressive horror feature debut.

The highly anticipated follow-up to their critically acclaimed VIDEO NASTIES: MORAL PANIC, CENSORSHIP & VIDEOTAPE documentary, director Jake West and producer Marc Morris continue uncovering the shocking story of home entertainment post the 1984 Video Recordings Act. A time when Britain plunged into a new Dark Age of the most restrictive censorship, where the horror movie became the bloody eviscerated victim of continuing dread created by self-aggrandizing moral guardians. With passionate and entertaining interviews from the people who lived through it and more jaw dropping archive footage, get ready to reflect and rejoice the passing of a landmark era.

Based on writer artist Dan (DOGHOUSE) Shaffer’s celebrated graphic novel comes a thrilling blend of sci-fi action, film noir and mind-bending slasher.  Dealing with multiple-personality disorder, Suki moves into a halfway house for recently released mental patients. But residents are dying at an alarming rate in the facility as dissociative Suki undergoes an experimental procedure to cure her illness involving ‘The Siamese Burn’ machine designed to eliminate her unwanted identities. But she's losing time, and the machine is changing, doing something new, something that turns her world inside out and highlights the dangers of mechanical thinking in an organic world.

Newlyweds Cory and Sarah Morgan head to the country for some much-needed family time where they hope Liam, Cory’s struggling 7-year-old son from his previous marriage, will learn to accept his stepmother. But arriving at their home they discover someone has been living there while they were away.  After speaking with the Sheriff they assume the intruders have moved on, however when Liam disappears they discover just how wrong they were. For they must confront a deranged family of killers who have been hiding in the house all along and are now holding Liam in their sadistic cult-like grip.

John is a mind detective, paid to enter people’s memories and uncover the reality behind crimes. It’s down to people like him to explore the shadows of the psyche sifting out selective fact from false recognition fiction. But what will he make of his new assignment, the brilliant, troubled and allegedly sexually abused teenager Anna? As John enters her mind and becomes more involved in her total recall, he must decide if she is indeed the victim of unspeakable trauma or a very clever and manipulative sociopath. Produced by Jaume Collet-Serra (ORPHAN, UNKNOWN, NON-STOP), can you guess the twist ending?

Mark Fisher disappeared from home in a blinding blue light flash. His friend Seth Hampton was the last person to see him alive. Two years later, a series of atrocious, grisly murders leads Seth to believe that Mark has somehow returned, but changed into something different, strange… not of this world. Mark has indeed become a humanoid alien receptacle for evil - and the last place you should look is in his cellar. The surprise hit at Toronto Midnight Madness, this short, sharp shock of super-violent scares and sci-fi splatter announces director Joe Begos’ arrival as an exciting genre talent.

Join The Mo Brothers (MACABRE) on a dark voyage into the warped minds of two men with nothing in common: Nomura, a self-obsessed serial killer residing in Tokyo who posts his sick handiwork on the internet, and Bayu, a failing journalist and struggling father in Jakarta who turns sadistic vigilante. Connected through their violent blood-soaked incidents, both men inexplicably start to feed off each other. But as their lives become more uncontrollable, each of them starts a shocking journey into a toxic maze of violent self-discovery. Fresh from Sundance comes this twisted tale by NIGHTMARE DETECTIVE producer Ushiyama Takuji.

Please note that there are no single tickets available for the Friday and Saturday films.

For further information:  www.frightfest.co.uk
Posted by JD at 19:56