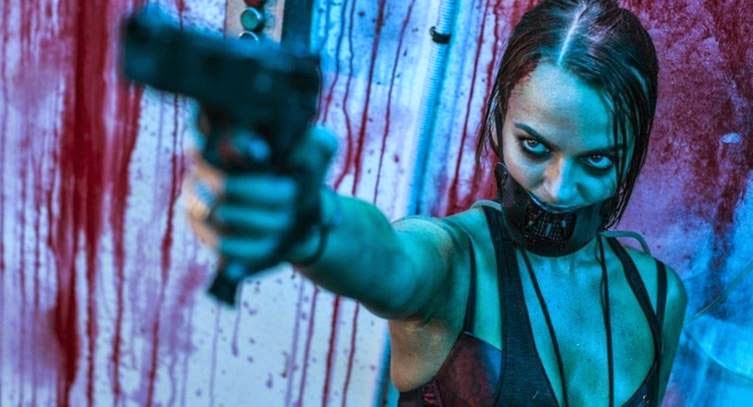 Kicking off with a special screening on Thurs 26 Feb and hosting eleven films on Fri Feb 27 and Sat 28 Feb, the UK’s favourite horror fantasy festival celebrates ten ‘gore-ious’ years at its second home at the Glasgow Film Festival with an all-exclusive slate of the freshest new horror films around.

Friday’s fearsome line-up kicks off with the European premiere of THE ATTICUS INSTITUTE, the paranormal activity shockumentary of the year, written and directed by  Chris Sparling, who wrote ‘Buried’. This is followed by the World Premiere of THE HOARDER, starring an on-form Mischa Barton who uncovers the worst horrors in the dank depths of a storage unit facility. Next up is the riotous WYRMWOOD, the zombie black comedy full of catastrophic carnage and over-the-top splatter. From Australian brothers Kiah and Tristan Roache-Turner, it’s the deadpan bloodbath everybody is talking about. The 9pm slot goes to 88, a glorious, gory and fast-paced homage to cult exploitation revenge thrillers. This is the World Premiere for April Mullen’s most graphic film to date, starring American Mary herself, Katharine Isabelle. Rounding off the evening in terrifying style is the European Premiere of THE ASYLUM (BACKMASK) – in which Marcus Nispel, director of ‘The Texas Chainsaw Massacre’ and ‘Friday The 13th’ remakes. takes us through a rampant landscape of sex, drugs and rock ‘n’ roll possession.

Getting the Saturday programme off to a nerve-jangling start is the UK premiere of the much anticipated and very disturbing CLOWN, produced by Eli Roth.  This is followed by FrightFest’s popular retrospective slot which this year is Mario Bava’s BLOOD AND BLACK LACE, one of the most influential genre movies of all time. Next up is the World Premiere of THE WOODS MOVIE – a behind-the-scenes exclusive reveal to everything you ever needed to know about how ‘The Blair Witch Project’ was produced, shot and marketed to become a groundbreaking blockbusting classic. This has been directed, edited and scripted by Russell Gomm, who is a long-serving member of the FrightFest TV crew.

Saturday evening unfolds in gut-wrenching style. Mo Hayder is one of Britain’s most acclaimed crime authors, but it took the Flemish Film Industry to turn her bestseller THE TREATMENT into a smash Euro success and FrightFest is pleased to present the UK Premiere of this harrowing serial killer thriller. This is followed by a real treat…FrightFest unleashed the Spanish sensation [REC] onto unsuspecting audiences in Glasgow 2008 and  the organisers are delighted to host the UK Premiere of Jaume Balagueró’s [REC]: APOCALYPSE, the shattering visceral conclusion to the global horror phenomenon. And to end the FrightFest carnival of carnage is the UK premiere of the creepy, brain-freezing THERE ARE MONSTERS, an instant cult classic and one of the scariest ‘under the radar’ movies of the year.

Alan Jones, co-director, said today: It’s been a decade of the decayed. The Glasgow Film Festival has been an instrumental part of FrightFest’s ever-increasing success story in becoming the UK’s leading horror fantasy brand and we wanted to do something extra special to celebrate our prestigious tenth milestone. So it was important to us to showcase a whole range of brand new titles, many of which will not have entered the genre conscious yet, and have never been seen on UK shores before. Because our Scottish audiences have always admired FrightFest for its cutting edge quirkiness, and our 2015 line-up reflects that approach to the horror hilt".

With special guests, surprises on screen and off, new short films showcase surprises and the festival’s unique community feeling, FrightFest at GFF has now become a must-attend occasion on the horror fantasy fan's calendar.
The festival’s guest line-up will be announced shortly.

21:00 ELIZA GRAVES (UK Premiere)
Synopsis: When young Doctor Edward Newgate (Jim Sturgess) arrives at Stonehearst Asylum in search of an apprenticeship he is warmly welcomed by superintendent Doctor Lamb (Ben Kingsley). At first, intrigued by Lamb’s modern methods of treating the insane, a series of events and warnings from the stunningly beautiful Eliza Graves (Kate Beckinsale) lead him to make a shocking discovery. It’s a revelation that exposes Lamb’s medical utopia and pushes Edward to the limits of his conscience. Nobody is who or what they appear to be. Based on the Edgar Allan Poe story ‘The System of Doctor Tarr and Professor Fether’.

13:00: THE ATTICUS INSTITUTE (European Premiere)
Synopsis: Dr. Henry West (William Mapother) founded The Atticus Institute in the 1970s to study telekinesis, clairvoyance E.S.P. and other unexplained psi-related phenomena. Thousands of subjects were tested using scientific methods many of whom showed abilities defying explanation by known physical laws. But just after West published the promising results of their research work, the small facility was mysteriously shut down in November 1976 by a concerned US Government. The reason? They met Judith Winstead (Rya Kihlstedt) whose supernatural abilities tested far beyond anything ever before witnessed.
Director: Chris Sparling Writer: Chris Sparling 92 mins  USA 2015
Cast: William Mapother, Rya Kihlstedt, Rob Kerkovich

16:00 THE HOARDER (World Premiere)
Synopsis: When Ella (Mischa Barton) discovers her Wall Street banker boyfriend is renting a secret storage unit, she suspects he’s using it to hide an affair. Enlisting the help of her best friend Molly (Emily Atack) she breaks into the facility only to discover something more terrifying instead. Now trapped in a darkened building with a group of neurotic strangers who start disappearing one by one, Ella soon uncovers even worse horror in the dank depths. Her life or death battle to escape eternal enslavement is about to begin….

18:30 WYRMWOOD  (UK Premiere)
Synopsis: A post-apocalyptic zombie invasion, caused by a wayward comet, turns personal for Barry, an Oz mechanic (Jay Gallagher) when his sister Brooke (Bianca Bradey) is abducted by a sinister team of gas-masked soldiers for flesh-eating experiments by a mad scientist. Sporting MAD MAX-style designs, a glorious sense of humour, energetic execution, new and outrageous zombie lore and KC and the Sunshine Band, this super-fresh spin on a favourite genre is a raucous riot of black comedy, catastrophic carnage and over-the-top splatter.

21:00 88 (World Premiere)
Synopsis: Gwen (Katharine Isabelle) arrives disheveled at a mysterious roadside diner. But who is she really because she has no idea where she is or how she got there in such an anguished state. Split between two timelines, Gwen gets taken on a violence-fuelled journey into death and destruction and becomes the most wanted woman in Tennessee seeking out the person responsible for her lover's murder.

23:15 THE ASYLUM (BACKMASK) (European Premiere)
Synopsis: Six teens throw a party in a rundown building and find a vintage record. Talk turns to ‘backmasking’ - subliminal messages recorded onto a music groove heard only when the track is played backwards – and they play the vinyl for a giggle. Soon a seemingly malevolent entity has infiltrated the group, wreaking havoc. However the spirit is actually trying to convey a message and the real source of horror is something - or someone - much closer to home.
Director: Marcus Nispel  Screenwriters, Marcus Nispel, Kirsten Elms 90 mins  USA 2015
Cast: Stephen Lang, Brett Dier, Brittany Curran

11.00 CLOWN (UK Premiere)
Synopsis: When the entertainer hired for his son’s sixth birthday party is a no-show, doting father Kent dons a clown outfit himself. But after the festivities, he finds he can’t take it off – the bulbous nose is stuck to his face, the frizzy wig glued to his hair and the make-up permanently etched on his features. Too late he learns the costume is the skin of an ancient demon and his family must race to break the curse before the transformation into a homicidal killer with outsize shoes is complete.
Director: John Watts Screenwriters: Christopher D. Ford, John Watts 102 mins  USA / Canada 2014

16:00 THE WOODS MOVIE  (World Premiere)
Synopsis: In October 1997, a group of filmmakers ventured into the Maryland woods to produce a low budget independent horror movie. THE BLAIR WITCH PROJECT would become a global phenomenon and began the ‘found footage’ genre that remains a potent force today. Now for the first time you can see how that record-breaking groundbreaker came into being.

From never-before-seen recordings of pre-production meetings, audition tapes and test footage to the actual shooting, first preview screenings and marketing at the Sundance Film Festival, all the key personnel guide you through the discussions and decisions that minted a shock sensation classic.

21:30 [REC]: APOCALYPSE (UK Premiere)
Synopsis: Picking up the intense action immediately after [REC] 2 - expanding on the mythos from all three predecessors, plus referencing cult genre classics - TV reporter Ángela Vidal (Manuela Velasco) is extracted from the cursed apartment building and taken to a high-security quarantine facility aboard an oil tanker. There, in the bowels of the dark and desolate ship, Dr. Ricarte (Héctor Colomé) is experimenting with the infectious virus to find a cure before another living dead outbreak occurs.

23:30 THERE ARE MONSTERS (UK Premiere)
Synopsis: Monsters are taking over the world, slowly, quietly and efficiently, but you won’t see them coming until it’s far too late! Four film students embark on a road trip to obtain promotional interviews for their college. However en route they witness a series of odd events, strange behaviour, shocking actions and what seems to be surplus of twins. Their well-ordered universe literally changes before their camera lenses uncovering a terrifying secret lurking just under the seemingly calm urban landscape.

For further information:  www.frightfest.co.uk
Posted by JD at 11:08