Interview with Can Evrenol 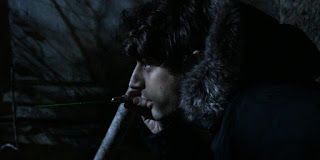 About:
Born and raised in Istanbul, Evrenol studied Film Studies and Art History at the University of Kent at Canterbury. Upon graduating, he has independently written, directed and produced short horror films, which won him several international awards, as well as being officially selected to more than 40 international genre film festivals around the world.

Ahead of the UK premiere screening of BASKIN at the Glasgow Film Festival, we asked the director Can Evrenol a few pertinent questions…

Q: What were the challenges of elongating the BASKIN short film ideas into a full feature?

A brief history of Turkish genre cinema and the must-see movies virgins should see?
Please refer to the awesome award winning documentary "Remake, Remix, Rip-Off" (2014) for a brief history Turkish genre madness. Must see movies: "Man Who Saves The World aka Turkish Star Wars", "Tarkan vs Viking" and "Deathless Devil", tho be sure to have your fast forward button close. And last but not least "Dort Yanım Cehennem" whose english subttiles are done by Evrim Ersoy and I!

Q: BASKIN is visually and narratively very ambitious for your first feature…

I guess it is a continuation of the same visual and narrative journey that I've been experimenting and progressing on through my short films. I'm learning as I go.

Q: Lucio Fulci, HELLRAISER, ‘Hansel and Gretel’ … what were your other main inspirations for BASKIN?

Q: Ulas Pakkan’s electronic score really creates a fabulous mood. Was it always the idea to invoke an 80s vibe of creepy unease?

Yes it was actually. A mixture of that 80's feel and modern dark synth in the footsteps of Trent Reznor, Clint Mansell and Cliff Martinez

Q: BASKIN begins as an arthouse shocker and then turns hardcore gore – you seem to favour genre collisions and shifts?

It was always my intention to make a movie that begins a as a European arthouse festival film, slow, controlled and orchestrated. But as later progresses into the mad world of surreal horror and a visual attack on the audience. That's what I tried to experiment with Baskin.

Only God Forgives, Frontieres and I Saw The Devil were particularly the films that we studied together in terms of light.

Q: Let’s talk frogs…how many did you use and why?

Frogs are doom bringers in mythology. In Baskin, they lead the cops to their doom, in their nightmarish journey. They symbolise the film getting off it's tracks. We used quite a few, although if I had the budget I'd love to have hundreds more...

Q: Mehmet Abi cuts quite a strong impression as Father. Where did you find him and is he the new Michael Berryman?

I found Mehmet Abi's headshot while randomly going through the old archives of a cast agency. I was just looking for a creepy looking extra for my short film, Baskin (2013). I noticed him right away when I arrived at the set. He was the centre of attention. Yet everybody was looking at him from a distance. I went straight to him, casually introduced myself, and shook his hand.Turns out that he's a car park attendant. No acting experience. He just enrolled at a cast agency 10 years ago and been waiting ever since.

When it was time for the feature, I wrote the Father character with him in mind. But it was obviously a huge gamble to give this most important role of my first feature film to a non-actor. I rolled the dice and sent him the script. Mehmet Abi told me that he would read the script during the religious holiday, while he visits his hometown Samsun. A couple days later he sent me, on my phone, some the scenes that he actually painted. I was flabbergasted. I loved it. I asked for more, and he painted some more. Soon after seeing these amazing paintings I said that's it, this is a much more special case than I thought... After the Turkish premiere of Baskin, his paintings were exhibited in "Bant", the coolest independent art gallery in Istanbul.

To prepare him for his character, I asked him to watch such films as Apocalypse Now, Hellraiser and Zeki Demirkubuz films. He loved them all. His feedback to me was pretty deep and poignant. I was touched. There and then, I trusted that we had a new Michael Berryman at hand! Today, whenever we are at a festival Q&A, it is my great pleasure to hear Mehmet Abi (Brother Mehmet) talk about Baskin...

Q: You already have the sequel written?

Yes we do have a crazy idea for a sequel actually, but currently I'm working on something else.

BASKIN screens at part of FrightFest Glasgow 2016 on Sat 27th Feb at the GFT Screen 1, 7.05pm. Can Evrenol will be in attendance.

To book tickets: http://tickets.glasgowfilm.org/en-GB/categories/frightfest
Posted by JD at 11:09