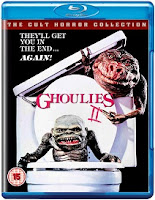 Ghoulies 2 is out on Blu-ray on 11th April! and to celebrate we have a great competition for you and 3 copies to win.

The Ghoulies are back and more devilish than ever, as they turn an unsuspecting carnival into a house of pandemonium in this wildly outrageous sequel to the original smash hit to Ghoulies!

Satans Den has received its final warning; either the not-so-creepy House of Horrors spooks-up its act and scares some customers fast or its gateway to hell will be closed for eternity. Just when Larry Prentice (Damon Martin) and his uncle Ned (Royal Dano) think theres not a ghost of a chance that theyll save their show, they get some uninvited visitors to spice things up. The Ghoulies makes Satans Den their home and profits soar as the demonic little creatures wreak havoc on the helpless fairgrounds. So take a ride on the Ghoulie-Go-Round and play some Bumper Ghoulies enjoy yourself because the Ghoulies will always get you in the end!

Winners will be chosen randomly and will be informed via email.
Posted by JD at 11:32