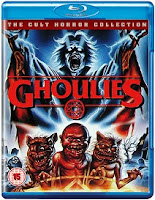 Ghoulies is out on Blu-ray on 11th April! and to celebrate we have a great competition for you and 3 copies to win.

As a child, Jonathan (Peter Liapis) was almost killed by his father, Malcolm (Michael Des Barres), during a satanic ritual. After being saved and raised by Wolfgang (Jack Nance), who has kept him unaware of his background, Jonathan inherits Malcolm's house and moves in with girlfriend Rebecca (Lisa Pelikan). Through his explorations of the house he begins unlocking the secrets and latent powers contained within his new found home.

But there are other dark powers at work in the house; powers more terrifying, more hideous than anything youve ever seen. It is foretold that Evil will triumph and Ghoulies will walk the earth

Winners will be chosen randomly and will be informed via email.
Posted by JD at 11:30