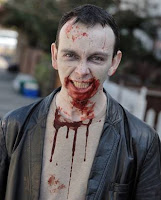 James Moran (born 5 March 1972) is a British screenwriter for television and film, who wrote the horror-comedy Severance.

He works in the horror, comedy, science-fiction, historical fiction and spy thriller genres.

“Who the hell wouldn’t want to see Alan Ford smashing Zombies to bits?”

Ahead of the Horror Channel’s network premiere of COCKNEYS VS ZOMBIES on Friday 4 November, 9pm, writer and self-confessed genre junkie James Moran  reflects on the making of the film, writing a new Zombie script and why the original Dawn of the Dead is his favourite Zombie film.


Q: What movie did you see growing that inspired you to become a writer?

JAMES: It all started with Doctor Who, which I've been watching since before I can remember - I used to sit and watch the entire end credits to see what all the names and jobs were, and made up my own stories to fit into the show. Later, I watched a lot of "making of" shows, that explained how the effects were done, the stunts, showed the directors on set - that made me want to get into the movies because it seemed like so much fun. The first movie that made me aware of the writing was A Nightmare on Elm Street (I was WAY too young to watch it, but did anyway), because it was the first horror movie I'd seen which allowed the victim to fight back, and fight back really well. It opened my mind and made me realise, I can tell stories in any way I want.


Q: Where did the idea of Cockneys Vs Zombies come from?

JAMES: Matthias Hoene, the director, had a title and a pitch, and really wanted to make a funny zombie movie with no-nonsense Cockneys dealing with the supernatural shenanigans in typically down to Earth ways. He and the producers asked me to write the script, but I was too busy in TV at the time. A year later, they had a script but wanted to go in a new direction, so asked me to start again from scratch. I went back to his initial pitch, approached them with some ideas I felt strongly about, they liked what I'd thought of, and I went from there. 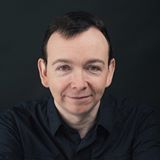 Q: Did it change much from first draft to the final version?

JAMES: Not very much - there were a few more characters that got trimmed to save time, and for a film that's already got tons of characters, it initially had several more! One of the pensioners got combined with another one, and two more hostages got deleted because they didn't affect the plot (an excellent reason to cut anything). But mostly it stayed pretty much the same, just got tighter.


Q: Were you restricted by budget?

JAMES: Not in my head! I just went full on one thousand percent, assuming that for every five ideas I threw in, one or two would survive. I didn't think for a minute that everything would be achievable, there are always things cut out for budget reasons, so I made sure to overstuff it with mayhem so that there'd be plenty left. But they managed to do everything within the budget, I was amazed. The only thing we couldn't do was a bus crash, but it ended up being a funnier joke anyway, so I'm happy. 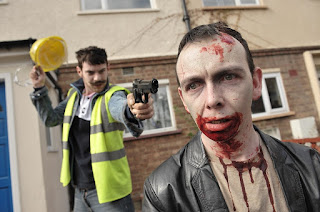 Q: The cast is amazing; did you write with anyone in mind?

JAMES: Alan Ford. Right from my very first meeting with Matthias, James and Mark (the producers) I said they absolutely had to get Alan Ford, because who the hell wouldn't want to see him smashing zombies to bits?! Also the storyline I'd come up with required a cool granddad character, and I wrote it for him from the very first line. I didn't know who else would play the other parts, and I was massively surprised every time there was a new casting decision, I kept asking if the actors had read the script or if the producers had tricked them into it... But I like to think I write fun parts to play, so even the smaller roles have something cool or crazy for the actors to do. I'm incredibly honoured that they took the roles and enjoyed them.


Q: Are you a writer who likes to be on set or once you’ve written your script you let the director “do what they want” with it?

JAMES: I like to be on set, but am very respectful of the director's authority - you have to have one person in charge, and I'm not one of those writers who stands there coughing if anyone changes a word, I'm just there to watch and help if I'm needed, or just enjoy the show if I'm not. I try to be there for big dialogue days in case the director or actors want some line changes or alternate options, which happened a couple of times. I'm not precious about the lines, we're all there to make a good movie, and that's my priority.


Q: Would you like to return to the zombie genre?

JAMES: Definitely! I've got another zombie script floating around that I'm hoping we can get made soon, and if something else came along in that genre and felt right, I'd jump at it. I've always, always, always wanted to make a zombie movie, I love them.


Q: What’s the best zombie movie ever made and do you prefer runners or walkers?

JAMES: Dawn of the Dead, the original (although I love the remake too, they both exist as their own movies and do different things). The original is glorious. I have nothing against runners, but I prefer walkers. Walkers are way scarier because they seem silly at first, but they'll wear you down, quietly, you won't even know there's one behind you until it's taken you down. You think you've found a hiding place, you think you've got away, but they'll just keep coming, and coming, and coming, shuffling towards you, gaining in number, and they'll always - ALWAYS - get you in the end.


Q: You’ve written for a number of different mediums but which do you prefer?

JAMES: They each have their pros and cons, I love them all in different ways. With TV, you get the thrill of knowing that tons of people are watching your show right now, at exactly the same time. With movies, you get to sit in a room full of people and see, hear and *feel* their reaction. With comics, you get an unlimited visual fx budget. With the web, you get instant feedback and see exactly where your audience is. They're all fun, because I get to make up stories for a living. With this screening of Cockneys on the Horror Channel, I get the best of the TV and film worlds, because it's a movie I wrote going out on TV! I'm very honoured it's playing on the Horror Channel, where it belongs.


Q: So, what are you working on at the moment?

JAMES: Mina Murray's Journal, a modernised vlog-style adaptation of Dracula, with Mina and Lucy as the heroes - I'm calling it a Vladaptation... The first season is online now, at www.minasjournal.com. We're still taking Connie around to festivals, that's a short film written & directed by my partner Cat Davies, we produced together, and I edited. I wrote episode 3 of the current series of Eve on CBBC, I've got another couple of shorts I want to direct, a couple of features in the pipeline, and a TV series in development.

Cockneys Vs Zombies is on Horror Channel, Fri 4 Nov, 9pm.