Templeheart Films, the producing company behind Paul Hyett’s HERITIKS and Andy Edwards’ IBIZA UNDEAD, are set to unleash a new kind of monster in THE TOMBS, which has just finished filming at The London Tombs, The London Bridge Experience’s horror themed tourist attraction.

Synopsis: A clutch of C-list celebrities and the tabloid press have gathered at ‘The London Tombs’ to participate in a publicity stunt for a new horror movie being launched  They and the cast are to take part in a filmed challenge in which their task is to find the skull of notorious necromancer Robert White. The tour guide actors are on hand to make their mission as scary as possible. 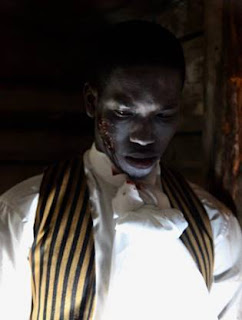 Little do they know that deep in the bowls of the building something has awoken and what starts as a night of frightful fun turns into one of intense terror when the evil entity starts stalking the claustrophobic halls of this maze of terror.
Some games just shouldn’t be played…

THE TOMBS, shot over a five week period at the end of 2016, was the first film allowed access to The London Tombs.
Director Dan Brownlie commented: “We were incredibly privileged to be allowed to film there. considering this was the first time that the attraction has ever allowed third party photography of any kind to take place. It was an fantastic opportunity not to be missed” 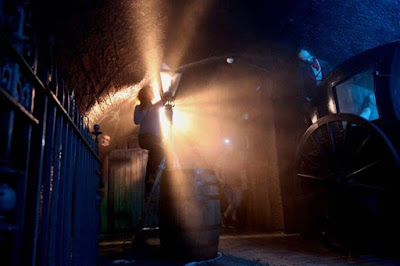 Producer Rachel Gold added: “With the success of attractions like ‘Secret Cinema’ and, the growth of interactive genre experiences, it was a great opportunity to create a movie where the actual film location is open to the public to experience for themselves what our film’s characters are going through.”
The film is set to be released later this year,
THE TOMBS is a Templeheart Films & The Attraction Movie Production, produced by Rachel Gold, exec produced by Elisar Cabrera, Lyndon Baldock & Kevin Kane. Directed by Dan Brownlie and written by Michael W Smith.
Posted by JD at 10:23