Ahead of the UK premiere of his latest film IT STAINS THE SANDS RED at Horror Channel FrightFest Glasgow, Colin Minihan chats about the creation of his ‘zombie love story’, the challenges of shooting in Death Valley and his new movie ‘Still/Born’. 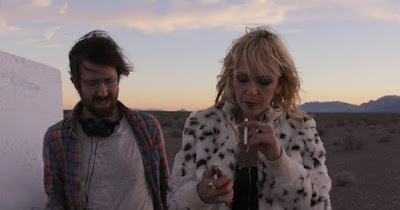 Q: Are The Vicious Brothers still an entity? You’ve only co-directed ‘Grave Encounters’ under that moniker – ‘Extraterrestrial’ and ‘It Stains The Sands Red’ carry your separate credits. That’s the way you want it from now on?

COLIN: Our roles were just less defined when we made ‘Grave Encounters’ because we were both very young.  If we make a film together and feel like it's a Vicious Brothers film, then I think we’d use it again...But then again there are far too many “brothers” right now – it starts to feel a bit gimmicky.

Q: ‘It Stains The Sands Red’ is such a terrific and deceptively simple idea, where did the inspiration come for the story?

COLIN: A combination of things. The main one was that I had just moved to LA and was eager to find an idea befitting of the desert – which I’ve always found to be extremely cinematic but never had a good idea for. I think after watching ‘World War Z’, I jokingly asked Stuart what hadn’t been done with zombies and could be done on a low budget… He responded something like,  “I don’t know… One Zombie?” -- It was a light bulb moment for me, like, “that’s it! ONE ZOMBIE!”

Q: Did the overall arc of the story change in the writing process? Molly’s zombie pursuer would always become her best friend, then confessor, and finally saviour?

COLIN: The lead character changed throughout the writing process. The first drafts were actually written for a male protagonist who was a struggling alcoholic and had abandoned his son in the city.  After rejecting that idea, we wrote this other script called ‘The Last Stakeout’, which I’d like to make someday, but then finally I pitched the new take on the story for ISTSR to Stu – which would follow Molly, a troubled Las Vegas stripper on her journey through the desert with and against the Zombie – who she would name Smalls. This version really clicked fast while writing… it wasn’t like pounding away at the idea by force. It came out relatively quickly, which is always nice and usually means it’s flowing well. It also felt more do able on a low budget as the flashbacks were extremely minimal and most of the shoot would be just two actors on screen, albeit one is in full prosthetics.

Q: You play with zombie clichés brilliantly, and upturn them like an expert. It makes the movie a constant surprise as a result?

COLIN: We tried to just let Molly’s character arc guild the end result of the script. We knew we needed to break her down throughout and get there in an organic way – it was very challenging to write this film because she is talking to someone who can’t talk back. So she is giving exposition but it can never feel forced – it has to be earned. Which is very challenging in this case.

Q: Brittany Allen carries the movie superbly. She’s a Scream Queen favourite and you cast her in ‘Extraterrestrial’ too. Was it written for her?

COLIN: When the script was re-written for a female lead… We knew right away that it had to be Brittany. There was never anyone else. She is a character actor who has been acting since she was a child and is completely transformative in many of the rolls that she’s played… I hope people see how insanely talented she is with this film. It’s definitely her film.

I also want to mention my pal Juan Riedinger (who is in ‘Grave Encounters’ as well). He brought a ton of depth to the role of Smalls and without his absolute commitment to the role, and his patience, this movie would not exist. He is both horrifying and lovable.

Q: The way Molly grows as a person from vacuous party girl to committed mother is superbly handled in the script by Brittany. That was always the core, the most engaging and surprising aspect of the movie?

COLIN: ISTSR was always a character journey through the desert. We were more inspired by Gus Van Sant's ‘Jerry’ more than anything while writing.

Q: Talk about the filming rigours; where was the location (the Valley of Fire in Nevada?), how long was the schedule, and it looks a really difficult shoot?

COLIN: It was probably the most difficult shoot I’ve ever been a part of. We kind of knew that going into it as when scouting Death Valley as a possible location we had a close call, almost passing out from the intense sun on top of a dune.

This film is as indie as it gets. I didn’t even have an AD or Script Supervisor on set – and those are two of the main people a director leans on while making a film. We had no money so we had to be as economic and guerrilla as possible in order to pull off this sweeping story.  It was a rag tag group of like 10 people on set on any given day and the make-up crew was in a blood covered RV trying to get Juan camera ready.  -- At one point, Juan even slept in his zombie make up for three days straight because the application was so time consuming, never mind the time it took taking it off.

Because of what happened in Death Valley in the summer (heatstroke), we aimed for the Las Vegas’ desert in November and December in hopes it would be mild and maybe a bit colder at night. Unfortunately it ended up being freezing cold most of the time, even during the day. If you watch the film it is actually taking everything in Brittany to pretend to be hot when really she is freezing.

Q: The movie ends on an optimistic note, you see hope in an impending zombie apocalypse?

COLIN: If there is an impending Zombie apocalypse, we are all fucked. Much worse so than we already are.

Q: What can you reveal about your next project HAUNTED TEMPLE?

COLIN: ‘Haunted Temple’, aka ‘Temple’ is no more. Let’s skip this question. ha!

COLIN: I have a new film that I am very excited about called ‘Still/Born’. It is in the final stages of post-production. It’s about a young mother trying to protect her new-born baby from a supernatural entity. It’s probably the scariest film I’ve been a part of. I co-wrote it and produced it and it should premier very soon.
IT STAINS THE SANDS RED is showing at the Glasgow Film Theatre on Fri 24 Feb, 4.00pm as part of Horror Channel FrightFest Glasgow 2017.