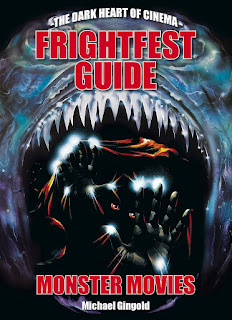 FrightFest and FAB Press once again join forces to launch THE FRIGHTFEST GUIDE TO MONSTER MOVIES, which goes exclusively on sale during Horror Channel FrightFest 2017, Aug 24 – Aug 28. Following the success of The FrightFest Guide to Exploitation Movies, this is the second in a planned series of wide appeal books for both the curious spectator and the cult connoisseur,

Written by celebrated writer, editor & critic Michael Gingold, the book contains 200 of the most frightening, fantastical and fun monster film features. Starting in the silent era, it traces the history of the genre all the way through to the present day. The films are given detailed individual reviews, with fascinating facts and critical analysis.

There are the Universal Studios favourites such as Frankenstein's Monster and the Mummy, the big bugs, atomic mutants and space invaders that terrorised the '50s. Then there's the kaiju of Japan, the full-colour fiends from Hammer and the ecological nightmares of the '70s and '80s, to the CG creatures and updated favourites of more recent years.

Cult-favourite filmmaker Frank Henenlotter, creator of some of the screen's most idiosyncratic and bizarre beings, contributes a foreword, and it's all illustrated with a ghoulish gallery of scary stills and petrifying posters representing the remarkable range of monstrous movies. Do you dare open the cover and confront the beasts within?

The official launch is at Horror Channel FrightFest, Cineworld, Leicester Square (24th to 28th August) The FrightFest exclusive hardcover will be on sale for just £20. The book's international street date is 18 September 2017. Paperback price: £16.99 (UK) $24.95 (US)