Author of various Aurealis Award-nominated and Year’s Best Fantasy & Horror recommended short stories, including ‘The Third Rail’ and the dark werewolf-bouncer world of ‘Watchmen’ (the basis for his upcoming novel Vilkači), Sterns is a former lecturer in Gothic & Subversive Fiction, editor of The Journal of the Australian Horror Writers and Ph.D. student in postmodern horror.

He is currently at work on his next novel and a raft of screenplays.

Q. When did you first become interested in screenwriting?

A. I lucked into screenwriting in many ways. Although I’ve been involved in the horror field for many years, coming from an academic background in Literature my focus was always studying and writing fiction. I loved film, which has of course become the driving force of contemporary horror, but it always seemed daunting or unattainable, especially for someone from the isolated realms of Australia. Then I stumbled upon examples of the screenplay form in collections by Dan Simmons and Dennis Etchison and Stephen King, tucked in amongst fiction pieces, and was intrigued by the style and that it seemed so much more artificial and sparse than the overdescriptive, elegiac prose I’d previously been drawn to (Cormac McCarthy, William Faulkner, etc.).

I attempted scripts of my own in my teens, but found it too hard to format on the old word processors (Final Draft broke open the script form in many ways and probably allowed countless new writers to pour into the field). It was really only fortuitously meeting and sharing an office with Greg McLean (who would go on to direct Wolf Creek), and a director from LA called Adam Simon who started dating my best friend’s sister (and who I spent many, many long nights with discussing horror theory), that the world of screenwriting began to open up to me. The funny thing is that following Wolf Creek 2 most people see me as a screenwriter -- which I’m happy to cultivate because it’s nice to be known for something -- and yet I’ve written fiction for years and also wrote the Wolf Creek: Origin prequel novel. You go where the work is, and most of my projects now are indeed screenplay-based.

Q. How did you get involved in fantasy/horror?

A. I was fixated on death and existence from an early age, so I think I have a natural tendency to the dark. I was also a voracious reader, secluding myself in my room and churning through Orwell and Huxley and other fun reads even at the age of ten. I like the satirical and metaphorical weapons that ‘fantasy’ (as in, an alternate reality or projection or exaggeration of reality, rather than castles and dragons) provides, and the unflinching existential exploration that is at the heart of good horror.

Q. Is this a full-time job?

A. I used to think writing never could be, which is why I pursued a Ph.D. and lecturing at university in the first place – to sustain the outside career of writing. But then I got sick of talking about other people’s work and quit the academic field some twenty years ago. Since then I’ve done any number of grueling part-time jobs to keep my head above water – bouncer (a lot of years of that), actor, typist. But I’m happy to say I went full-time a couple of years ago, with my fiancée’s help, and now write whenever I’m not looking after our whirlwind four-year old daughter. 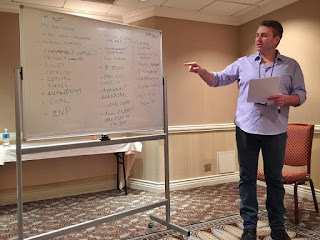 Q. Would you consider writing in other genres?

A. I’m currently working on a violent gangster movie, a scathing and funny LA horror-satire, I have a couple of SF scripts amongst my slate, so if the story or the approach is interesting enough, sure. But I tend to gravitate back to the broad field of ‘horror’ due to its ability to skewer social norms and comment on the human condition or the current political climate or the family unit without being too obvious or preachy. There’s always a way to slip something deeper into horror, even as subtext. If you don’t/can’t acknowledge the context of the world then what’s the point of story?

Q. Why do you think horror and fantasy books remain so popular?

A. Precisely because of what I’ve been saying – that they present alternate versions of the world that highlight and tear asunder assumed conventions. They can make the audience think, even unwillingly, forcing them to consider post-apocalyptic worlds in which the taken-for-granted safety and security of their current society falls apart, or to imagine their loved ones as betraying psychopaths, or the inevitability and unsympathetic nature of death (something which we in the West seem to be brought up to ignore, presumably so the good little worker bees don’t question the value of work and the quarter-acre home and the 2.4 kids in the face of eventual nothingness). 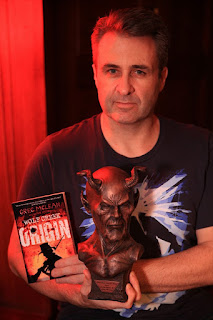 Q. What inspires your stories?

A. Everything. Every minute of every day. I’m sure all writers are inundated with story ideas constantly. It’s a matter of sifting through and blocking out all the inane detritus – the silly little ‘what-ifs’ that plague you. I do try to write the more fully-formed ideas down though, as you never know when you can develop them into something useful.

Q. The Wolf Creek saga is very disturbing. What made you think you could write so dark?

A. The world is dark. Wolf Creek is one of those horror stories that projects from real life, imagining the true happenings and terror behind the numerous murders and disappearances we’ve heard of in the outback. I think a lot of people were surprised by the novel Origin even more so than the movies. I’d obviously been storing up a lot of disturbing material and ideas about the forging of serial killers that poured out into that book. I still get comments that “I can’t believe you put such and such in”, and I have to think for a second, then admit “Did I? I can’t believe it either!”

Q. What do you think is the difference between Australian and American perspectives on horror?

A. Well, American horror is more mature in the sense it’s been developed by so many masters over the years (Hawthorne, Poe, Lovecraft right up to the present day in literature; countless Hollywood and independent films). Australia has a long tradition of gothic fiction, but a relatively smaller crop of current horror fiction writers. And while there was a bump in genre films in the 1970s thanks to the tax incentives, only a handful of horror films are made here every year (not surprisingly, considering our population).

But there do seem to be distinctive qualities to Australian horror – a defining element of Australian gothic for instance is that the tension arises not from antiquity or architecture or romantic melodrama as it does in the European tradition, but often from our unforgiving landscape. The earliest forms of settler art depicted the bush as a mythic and impenetrable stealer of children and of hope and dreams, a theme played out in many of the early works of fiction by such writers as Lawson and Baynton.

A period of cultural cringe seemed to quell this (the dark period of the 1990s when we put out dreck like Cut), but then Wolf Creek unashamedly embraced landscape as horror again and arguably paved the way for a resurgence that taps into this (Jamie Blanks’ remake of Long Weekend for instance, but also movies like Dying Breed, Primal, Van Diemen’s Land). And now recent entries like The Babadook are notable for the very fact they don’t rely on the geography of Australia for its effect. The American perspective on horror would take a book to detail, though I tend to find US studio films are often hampered by the need to assuage focus groups and market segments. Horror’s a naturally risky genre, so maybe it gravitates towards the independent low-budget scene to allow the greater freedom the more challenging ideas require.

Q. What do you think the legacy of fellow Australian Rocky Wood is?

A. Rocky’s legacy is still being felt in the Horror Writers Association, that’s for sure. Many of his initiatives and relentless campaigning continue to expand its numbers, and encourage exposure of the field to the wider community. He also put Australia on the map in some ways in the horror world, staunchly promoting those of us from his homeland at every opportunity (without ever being nepotistic). He was also a mentor to many of us, and was always available for finely-honed advice. His passing is still a shock now.

Q. What are your favourite horror books?

Q. What are some of your favourite horror movies?

A. The classics: The Thing (1982 of course), The Howling, Videodrome (in fact, anything by Cronenberg), Invasion of the Body Snatchers (1978). More recently Ringu, Martyrs, Inside, and the amazing Black Swan.

Q. What do you consider your greatest accomplishment as an author and screenwriter?

A. Perhaps actually getting published, and actually getting a film made? I think people assume it’s a fait accompli that a writer merely has to write something and then it gets published (or filmed in the case of a screenplay). That’s the process. The hard part in all this is convincing the powers-that-be to actually back the thing!

Q. Do you have any advice for new writers?

A. Your words aren’t golden. Be prepared to take on criticism and advice. But at the same time be unwavering in your confidence in your ability. It’s tough to walk that tightrope without becoming disillusioned, but you won’t publish anything if you quit.

Q. What is your opinion of the new self-publishing trend?

A. It’s called ‘vanity publishing’ for a reason. If your work’s not strong enough to make it past a commissioning editor there’s a reason.

Q. What are your current projects?

A. I probably have ten or twelve scripts I’m working on at the moment, in various stages of development. I’m hopeful of two going into production this year – one in New York, and the other here in Australia. But we’ll see. You never believe something will get made until the first day of shooting. I also have a novel I’d like to get back to, but as you can imagine juggling so many projects there’s not a lot of time for everything.

Q. What advice do you have for aspiring authors who want their work to be adapted into a screenplay?

A. You could always write it yourself. Failing that, you could try to convince a screenwriter (which isn’t likely – they have more than enough scripts to work on thank you very much), or somehow get it to a producer, however one does that. Just realize getting a film made is statistically much harder than a novel published (and that is incredibly hard). So if you happen to be approached for an option, consider it a nice validation of your writing, but you’ll probably never one day sit in a cinema watching an adaptation (and probably not one you’re proud of). That said, if someone does come looking get a lawyer quick smart.

Q. Please in your own words, write a paragraph about yourself & your work.

A. I’m a former university lecturer, now novelist and screenwriter, and have been involved in the horror field for over twenty years. I’m the co-writer of Wolf Creek 2, which won best screenplay at the Madrid International Fantastic Film Festival, and am the author of prequel novel Wolf Creek: Origin, which won best Australian horror novel at the Australian Shadows Awards. I’m currently writing scripts in collaboration with Greg McLean, Matthew A. Brown, Jamie Blanks and other genre masters, and find myself saying yes to far too many cool projects.