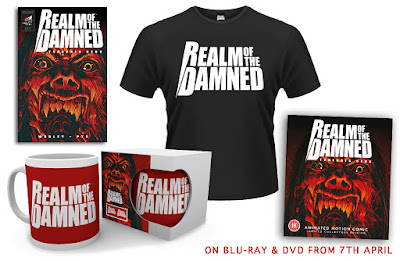 Realm Of The Damned - Tenebris Deos is out on DVD & Bluray on the 7th of April and to celebrate we have a great competition for you and merch bundles including the film, t-shirt, mug and original graphic novel up for grabs!

Synopsis:
The monsters have won. Our world now belongs to them. Realm of the Damned: Tenebris Deos is a new UK animated motion comic of pure Black Metal horror that unleashes the classic gothic monsters on a modern rampage of redemption and damnation. Raw, fast-paced and bristling with atmosphere, this is a bloody and blasphemous epic that leaves no church unburned.

Realm of the Dead - Tenebris Deos is available on Blu-ray & DVD from 7th April, 2017

Check out the release on Amazon by clicking the link below: (Opens in a new window)
Realm Of The Damned - Tenebris Deos [Blu-ray]

Terms and conditions
1. Closing date 16-04-17
2. No alternative prize is available
3. When the competition ends as indicated on this page, any and all entries received after this point will not count and emails blacklisted due to not checking this page first.
4. Winners will be chosen randomly and will be informed via email.