A group of young tourists (Ingrid Bolsø Berdal, Jonathan Sadowski, Devin Kelley), hoping for an adventure off the beaten path, hires an extreme-tour guide. In spite of warnings, the tour guide takes the sightseers to the town of Pripyat, Ukraine, once home to workers at the nearby Chernobyl nuclear power plant but abandoned after the 1986 nuclear disaster. After briefly exploring the ghost town, the tourists find themselves stranded -- and worse, they are not alone. 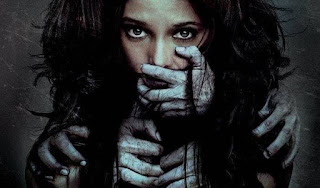 Plagued by frightening occurrences in their home, Kelly (Ashley Greene) and Ben (Sebastian Stan) learn that a university's parapsychology experiment produced an entity that is now haunting them. The malevolent spirit feeds on fear and torments the couple no matter where they run. Desperate, Kelly and Ben turn to a paranormal researcher (Tom Felton), but even with his aid, it may already be too late to save themselves from the terrifying presence

The residents of a small town have begun dying under strange circumstances, leading young Mike (Michael Baldwin) to investigate. After discovering that the Tall Man (Angus Scrimm), the town's mortician, is killing and reanimating the dead as misshapen zombies, Mike seeks help from his older brother, Jody (Bill Thornbury), and local ice cream man Reggie (Reggie Bannister). Working together, they try to lure out and kill the Tall Man, all the while avoiding his minions and a deadly silver sphere.

Michael King (Shane Johnson) doesn't believe in God or The Devil. Following the sudden death of his wife, the documentary filmmaker decides to make his next film about the search for the existence of the supernatural. Michael decides to make himself the centre of the experiment in the hope of proving that religion, spiritualism, and the paranormal are nothing more than myth. But something does happen. An evil and horrifying force has taken over Michael King. And it will not let him go. Also stars Dale Dickey, Tomas Arana and Julie McNiven.

Alice (Rachel Blanchard) is just going through a divorce from Josh (Stephen Moyer) and has her house on the market. Unknown to her, a murderous couple, David (Brian Geraghty) and his accomplice Lila (Tricia Helfer), has sneaked in and hidden. When Alice returns, instead of killing her, David takes her captive, locking her up in the crawlspace in the basement. He wants to keep her alive but doesn’ttellLila. Whilst the psychotic couple engage in a sex and kill-spree with anyone visiting the house, Alice begins to understand the strange bond between her captors and David's interest in her…