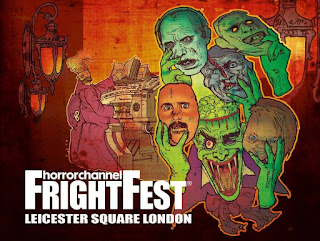 Celebrating a return to one of FrightFest’s former homes (The Empire) and the revival of some familiar characters to the festival line up, such as Chucky, Victor Crowley & Leatherface. were inspirations behind the concept.

Graham reveals: “My image is an attempt to amalgamate the Gothic roots of horror with the 70s Monster revival that saturated the US and UK, inspiring generations of filmmakers that created some of the most successful film franchises and oddities of the last 40 years. Universal monsters meets 70s bubble gum pop. I also thought it would be fun to play with the idea of a FrightFest Phantom, the face behind the best in horror and added the scratches and dirt to make it look like old damaged film stock.”
Posted by JD at 14:11