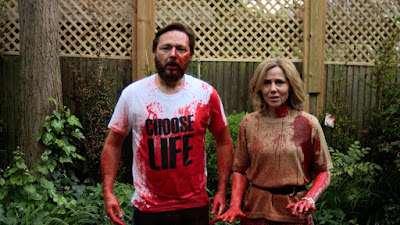 There are twelve films from the United Kingdom, forming the centerpiece of this year’s line-up. These include James Moran’s BLOOD SHED, starring Shaun Dooley and Sally Phillips, where a man’s love of his garden shed takes a rather murderous turn. In JUDGEMENT, Neil Maskell stars as a single man looking for love in all the wrong places and Laurence R. Harvey shines as a mutated children’s’ toy in TEDDY BEAR’S PICNIC. Then there’s Katie Bonham’s MAB, about a girl who turns to witchcraft to teach someone a lesson.

The other home-grown offerings see people haunted by ghostly figures in HELD DOWN BY A SHADOW and MAYFLOWER, while humans are the threat in THE WELCOMING and MISDIRECTION. Other dimensions hold secrets and sway in EVENT HORIZON and HUM, while the house down the lane holds horror in the Cannes-selected REAL GODS REQUIRE BLOOD. And finally, SMEAR will make you laugh all the way to the most uncomfortable procedure at the doctors’ surgery. 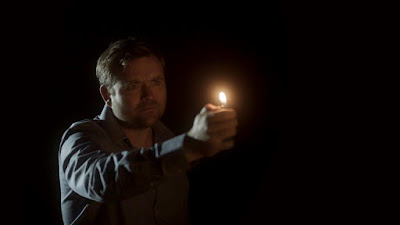 Horror from around the world will creep up on you, first as a cat with a deadly secret in MEOW, then as a woman out for revenge in FOR A GOOD TIME, CALL…Being alone in a strange house is no laughing matter in DRIP DROP and ROTARY, while one should be careful of what lurks behind the doors in CRESWICK and FEEDING TIME, which stars Stacy Snyder and Graham Skipper. And if you think butterflies are just cute flying insects, VOCABULARY 1 might change your mind.

Love can tear you apart or set you free in the gorgeous fantasies of BAD HEADS and NIMMER, while the loss and search for loved ones becomes an obsession in MAN IN THE MOON and AN ELDRITCH PLACE. And the lure of power is too much for some people when the realm of science fiction makes the unbelievable seem real, in KEPT and TETHER.

In addition to the showcases, there are two special short film screenings. Preceding our opening night film ‘Cult of Chucky’ is THE DOLLHOUSE, a loving tribute to growing up in the world of the psychokiller doll, directed by Kyra Gardner. And our very own short film programmer Shelagh Rowan-Legg’s new film FLOW will have its European premiere preceding the screening of DHOGS..

Shelagh said today: "This year Horror Channel FrightFest's short film selection will take you from the darkest reaches of space to the darkest corners of the bedroom closet. With babysitters who are just a bit too inquisitive, manipulative men getting their just desserts, mothers trying to help their video-game addicted sons, security guards confronted by other-worldly monsters: these shorts from the UK and around the world offer the new wave of fantastic genre cinema”.

THE WELCOMING (World Premiere)
Director: Russ Gomm. Cast: Isabel Calder, Ben Shockley. UK 2017. 7 mins.
A little girl goes wandering in the woods. But some who wander might end up lost in darker places.

BAD HEADS (London Premiere)
Director: Rebekah Fieschi. Cast: Alice Dessuant, Diako Diakoff. France 2015.  14 mins.
Jenny wants love so much she is willing to create it from scratch. But what she creates might not be what she wants.

FOR A GOOD TIME, CALL…(European Premiere)
Director: Izzy Lee. Cast: Sean Carmichael, Tristan Risk. US 2017. 12 mins.
A man who uploads a homemade sex video taken in secret gets more than he bargained for when he makes a pit stop.

KEPT (World Premiere)
Director: Jaime Gonzalez. Cast: Jairo Camargo,  Manuel Sarmiento. Colombia 2017.m18 mins.
Scientists have discovered a way to record dreams, and those with ulterior motives waste no time exploiting those whose dreams are the most powerful.

MEOW (European Premiere)
Director: Chris Jopp. Cast: Eleonore Dendy, Charles Hubbell. US 2016. 13 mins.
Samantha has a new apartment, and a cat she must keep hidden from the landlord. But that might be hard with all the bodies that keep appearing.

EVENT HORIZON (UK Premiere)
Director: Joséfa Celestin. Cast: Kate McLaughlin, Lori Stott. UK 2016. 10 mins.
Julianne is reluctant to leave childhood behind. But her fear of the future manifests in a strange celestial object that she must confront.

MAN IN THE MOON (UK Premiere)
Director: Monique Mulcahy. Cast: Pauline Grace, JC Innamorati. Australia 2016. 13 mins.
A single mother is concerned about her son’s obsession with a homemade video game. But her obsession turns to fear when she intercepts a strange transmission.

MAYFLOWER (World Premiere)
Director: Christopher Goodman. Cast: Jason Ryall. UK 2017. 7 mins.
A young engineer wakes up from cryo-sleep during a routine deep space flight. Was it due to a false alarm, or something more sinister?

VOCABULARY 1 (London Premiere)
Director: Becky James. Cast: Emma Roselle. US 2016.
Snakes are dangerous, and butterflies are cute. But is that really the case?

FEEDING TIME (UK Premiere)
Director: Matt Mercer. Cast: Stacy Snyder, Graham Skipper. US 2016. 13 mins.
When a young woman fills in for her friend on a babysitting job, she begins to suspect things are not as they seem.

REAL GODS REQUIRE BLOOD (London Premiere)
Director: Moin Hussain. Cast: Anna Berentzen, Kirsty Doyle. UK 2017. 20 mins.
A young woman does her neighbour a favour and looks after her young children. But something is lurking in the shadows.

BLOOD SHED (World Premiere)
Director: James Moran. Cast: Shaun Dooley, Sally Phillips. UK 2017. 13 mins.
Jack loves a bargain. And he loves sheds. But when he gets his very own dream shed, it might be a little more than he bargained for.

TEDDY BEARS PICNIC (World Premiere)
Director: Thomas Hodge. Cast: Abby Miller, Laurence R. Harvey. UK 2017. 5 mins.
When this young mother and her daughter go out in the woods today, they are definitely in for a big surprise.

DRIP DROP (UK Premiere)
Director: Jonna Nilsson. Cast: Siham Shurafa. Sweden, 2016. 8 mins.
A woman returns home to find there is no water in the house. Later that night, the water returns in the form of a steady drip.

JUDGEMENT (World Premiere)
Director: Sean Healy. Cast: Neil Maskell, Sura Dohnke. UK 2017. 5 mins.
Tom is getting on well with Ann, so well that she introduces him to her son, Jed. But Tom might be in for more than he had in mind….

CRESWICK (London Premiere)
Director: Natalie Erika James. Cast: Dana Miltins, Chris Orchard. Australia, 2016. 9 mins.
While a woman helps her father pack up his house, they are both increasingly aware of the presence that they always knew was there.

HELD DOWN BY A SHADOW (UK Premiere)
Director: Alex Peace. Cast: May Kelly, Katie Marie-Carter. UK 2017. 18 mins.
Scarlett hasn't gone to bed with the light off in a very long time. But every night, she wakes up in the dark unable to move...and she's not alone.

THE DOLLHOUSE (World Premiere) Preceding CULT OF CHUCKY
Director: Kyra Gardner. Cast: Don Mancini, Brad Dourif. US 2017. 7 mins.
A filmmaker who grew up with the Chucky doll seeks out the other families surrounding the franchise to get their perspective on life with Chucky.

FLOW (European Premiere) preceding DHOGS
Director: Shelagh Rowan-Legg. Cast: Jamie Birkett, Lucy Clements. UK 2017. 5 mins.
When two women rebels are involved in a skirmish, they have more to argue about than the enemy...

Single tickets and passes are available to buy online:  http://www.frightfest.co.uk/tickets.html

For full programme details and timetables go to: www.frightfest.co.uk