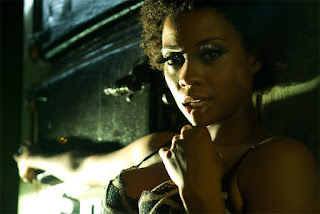 Linara Washington plays Vanessa, the special effects and makeup artist working on the film within the film in Darkness Reigns, on VOD July 10. In this exclusive interview Washington explains how she got into acting, how her character becomes the moral compass of her new movie and how it was working with Andrew P.Jones.

I’ve always loved the arts. My parents putt my sisters and me in dance classes and had us playing instruments—I started the violin when I was five—at every turn. My first play was TO BE YOUNG GIFTED AND BLACK when I was four years old.  I was fascinated with tv and films from a very young age and took to putting on whole shows in my bedroom with my stuffed animals. I always knew I wanted to act.

I was, however, also very good at math and science, and despite my parents openness to having me take all sorts of artsy classes they had no desire to have me pursue acting. It took the summer after my third year of college to finally have the courage to do something about this passion I had. So I took the money my father gave me for my MCATs and I bought headshots. Come graduation day, I had to tell him that I had not applied to any medical schools, and that I’d taken his money and purchased headshots. Needless to say, he wasn’t very happy.

It took a minute, but he finally came around and is my biggest supporter. I haven’t looked back since.


2. Tell us about your character in DARKNESS REIGNS?

Vanessa is the makeup and special effects artist for the film. She is a quiet, mind her own business kind of girl. She enjoys a challenge and prefers to work on her own whenever possible. It allows her to be around a lot of people without having to interact with a whole lot of people all the time. Being in the limelight or the center of attention is really uncomfortable for her. But as the film progresses she rises to the occasion and finds an inner strength that I don’t think she knew she had. In many ways she becomes the moral compass of the movie as it reaches it’s end.


3. The movie is full of great effects How is it acting/working with something that has to be inserted later in post-production?

I find it really exciting when I have to do something that presents an unusual challenge for me as an actor. Some of the best work comes in those moments when I have to actually imagine what the terrifying thing is instead of outright seeing it. It’s a little tricky because it takes a level of trust between the director and the actors that neither one is going to let the other one down. I can react as big or as small as is needed, but it’s the directors job is to make sure my reactions match with what will finally be put in once the effects are done. I think these moments also allowed me to stretch my imagination, which is obviously not as necessary when you get to see what the terrifying thing is in the moment.


4. It also has a lot of action in it. How demanding is a role like this because things can get pretty physical at times?

I’m an actor who loves action and being put in awkward and crazy positions. I would LOVE to do a movie that requires me to learn to do my own stunts.  DARKNESS had a fair amount of running up and down stairs and hallways, and because of the way we were filming there were few—if any opportunities to mess up without having to start all over again. We definitely got our workout in, and the sweltering heat certainly added to challenge.

If I had to speak to what was most demanding about this role for me, it would be playing producer at the same time. There’d be times when I was in the makeup chair learning lines, while also sending a PA out on an errand, and trying to make sure that each of the departments had enough petty cash to get through the day. This set kept me on my toes! Oh, did I mention that my child, who was still nursing, was also on set from time to time? Yeah! Crazy, busy times for Linara.


5. Tell us about working with Andrew, on a professional level?

Andrew and I work very well together. As producing partners we have a really nice balance.  I like doing the math, crunching numbers and money stuff while he, in addition to the writing, gets to work on putting together all the creative teams and scouting needs. Once we’re on set he directs and I act. He’s a good director in that he knows what he wants and can convey to his actors what he needs pretty succinctly.  He works quickly because as an editor he already knows what the final shot is going to look like, which can be a real plus when you’re on a tight schedule and budget.

I am an actor who takes direction really well. I enjoy bringing another person’s vision to life. I also enjoy playing, and taking risks. Andrew, as a director allows for both. It’s a pretty nice setup, really. 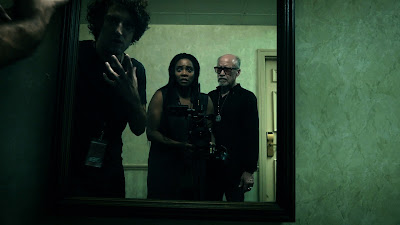 6. You've gotten a lot of positive attention with the film. Has that helped your career too?

I’ve been really lucky to be involved in a number of well-received projects. Every little bit helps and it certainly doesn’t hurt that a lot of the attention has been positive.


7. What's up next for you? Next movie to be released?

My goal is to book my first series regular role on a TV show. I’ve been getting close, so it’s just a matter of more hard work, time, and opportunity. Aside from that, Andrew and I are working on a couple of films, and I have a pilot that’s been swimming around in my head for forever that I would like to write.


8. Do you have time for any hobbies?

I have a number of hobbies, but if anything takes away from getting to indulge in them it’s being a full-time mommy. I love my kid and want to give her the world.

So, when I do have time I love to dance and hike. I enjoy going to the library and bookstores. I’ve been really out of practice when it comes to writing, but that is a hobby I’d like to recultivate. I have so many ideas and it would be a shame to just let them live in my head.

I would LOVE, LOVE, LOVE to do conventions and comic-con one day. Who do I talk with to make that happen?! 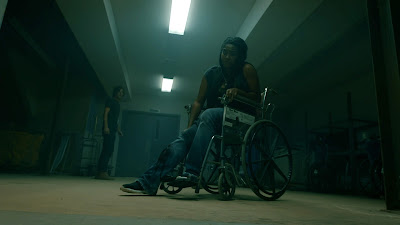