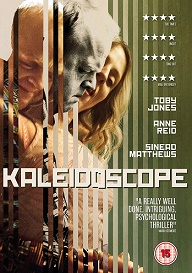 Kaleidoscope is out on DVD from 23rd September.

And to celebrate we have a great competition for you and 3 copies on DVD to give away.

Synopsis
GARNERING CRITICAL acclaim on its theatrical release, one of Britain’s greatest actors of today Toby Jones ‘glows’ (The Guardian) as the lead in Kaleidoscope, a bleak, nightmarish psychological thriller written and directed by brother Rupert Jones in his feature film debut.

A sparse, drab flat, on a housing estate in London, loud frantic knocking and a dog barking.  We meet Carl Woods (Toby Jones – Don’t Forget the Driver, Detectorists, Tinker Tailor, Soldier Spy), an ex-prisoner with dreams of starting a gardening business, as he’s abruptly awoken from his sleep on the sofa.  He goes to the door…no-one is there. Exploring the house, he notices lipstick traces on a glass, an ashtray full of cigarette butts,  he goes upstairs and finds a shocking discovery, a dead body in the bathroom. But is everything as it seems?

As the narrative twists and turns we follow Carl’s footsteps as he chats with his neighbour Monique (Noble), prepares for his first date in 15 years with someone he met online, Abby (Matthews) and gets a message announcing an impending, unwanted visit from his overbearing mother (Reid)…

With time running out, Carl’s relationship with his mother and the ramifications of his night with Abby now collide in dramatic, surprising, unforgettable ways.

Buy from Amazon by clicking here (Opens in a new window)

Terms and conditions
1. Closing date 30-09-19
2. No alternative prize is available
3. When the competition ends as indicated on this page, any and all entries received after this point will not count and emails blacklisted due to not checking this page first.
4. Winners will be chosen randomly and will be informed via email.