Competition: Win Asylum & The House That Dripped Blood on Blu-Ray 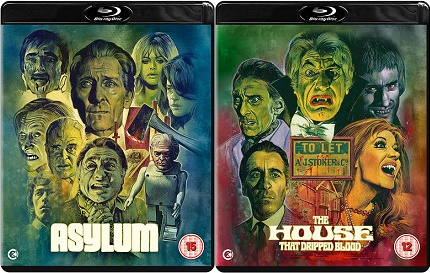 And to celebrate we have a great competition and a copy of each on Blu-ray to give away.

This hugely anticipated release starring a stellar cast will be presented in stunning rigid slipcase packaging featuring new artwork by Graham Humphreys, and a 40-page booklet with new essays by Allan Bryce, Jon Towlson and Kat Ellinger, not to mention a whole host of special features including director commentaries and featurettes, it will available from 29 July 2019.

When Doctor Martin (Robert Powell – The Italian Job, The Thirty Nine Steps) arrives for a job interview at a secluded asylum for the incurably insane, he must prove himself by listening to the macabre tales of four inmates to determine which is the former head of the asylum who experienced a breakdown. We join him on the investigation with these hair-raising horrors…

This star-studded anthology features Denholm Elliott, Peter Cushing, Christopher Lee, Jon Pertwee and Ingrid Pitt and is presented in a stunning box set featuring original artwork from Graham Humphreys alongside a whole host of fantastic new special features including new essays from horror aficionados and a 40-page booklet and is available from 29 July 2019.

Scotland Yard’s Inspector Holloway (John Bennett – Watership Down, The Fifth Element) investigates a mysterious mansion with a ghoulish history and a chilling fate for its occupants in these four tales of terror…

Terms and conditions
1. Closing date 13-01-20
2. No alternative prize is available
3. When the competition ends as indicated on this page, any and all entries received after this point will not count and emails blacklisted due to not checking this page first.
4. Winners will be chosen randomly and will be informed via email.