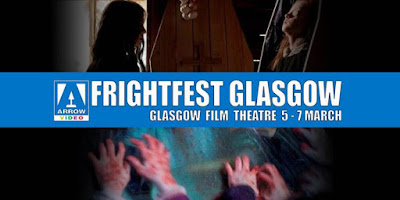 Welcome to the transgressive, the traumatic and the terrifying as Arrow Video FrightFest, the UK’s favourite horror fantasy event, returns to Glasgow Film Festival for a 15th fantastic year, from Thursday 5 March to Saturday 7 March, 2020.

Thirteen is lucky for some as that’s the number of new films being presented at the iconic Glasgow Film Theatre, embracing the latest genre discoveries from around the globe, spanning four continents, including one world, two European and seven UK  premieres.

Alan Jones, FrightFest co-director, commented: “Welcome to another banner FrightFest and another invitation to explore the horror fantasy genre’s fertile harvest bursting with creativity, imagination and difference in a world that often seems hostile to all three. So enjoy FrightFest Glasgow 2020: 13 new films from around the world guaranteed to offer a much-needed cinematic sanctuary”.

This is followed by the riveting horror mockumentary DEATH OF A VLOGGER, which comes home to Scotland following its hugely successful FrightFest August 2019 ‘First Blood’ debut. The director, Graham Hughes, and the cast will be attending – no doubt filming their every move…

Streaming a live exorcism? What could possibly go wrong? Friday kicks off with the UK Premiere of THE CLEANSING HOUR, a gory, scary and hugely entertaining horror comedy, directed by Damien LeVeck, where tech entrepreneurs meet evil head on. Then we have the European premiere of IN THE QUARRY, Uruguayan filmmakers Bernardo and Rafael Antonaccio’s penetrating look at gender roles and expectations is a tense and dynamic riff on the naturalistic heart-of-darkness genre.

Next up is the UK premiere of tense sci-horror thriller SEA FEVER, by award-winning Irish television director Neasa Hardiman. Connie Nielsen and Dougray Scott star as part of a marooned trawler crew struggling with a mysterious water-borne parasite.

The 8.45pm presentation is the World premiere of first-time director Adam Stovall’s remarkable comedy romance A GHOST WAITS. With hints of BEETLEJUICE and GHOST, it features a brilliant performance from MacLeod Andrews, star of THEY LOOK LIKE PEOPLE and THE SIREN. Adam and some of the crew will be there to introduce his film.

Rounding off the evening with an irresistible riff of humour, terror and squirm-inducing violence is the UK premiere of Ryan Spindell’s THE MORTUARY COLLECTION. With fabulous production design and a vibrant variety of tones, this wild ride completely pulls the rug out from under the audience.

Saturday's programme is a killer and the first film, ANDERSON FALLS, features director Julien Seri's high-tone brand of seat-edged thrills, starring Gary Cole and Scream Queen supreme Lin Shaye. Next, get ready for a dead funny zombie apocalypse as Living Dead lore explodes in a fun riff on the genre. The often hilarious ZOMBIE FOR SALE borrows from the best but South Korean director, Lee Min-Jae, making his film feature debut, adds his own startling twists to the beloved formula.

This is followed by the Scottish premiere of SAINT MAUD, a blistering debut from writer/director Rose Glass and a divine dive into obsession, isolation and urban deprivation, featuring a star-making performance from Morfydd Clark as the heartbreakingly conflicted Maud. Rose will be in attendance, alongside several of the producers.

The evening programme bursts into action with the European premiere of BUTT BOY, a surreal, bizarre and utterly unique viewing experience, in which a detective has to get to the bottom (literally) of a series of suspected murders. Directed by Tyler Cornack, imagine the indie lovechild of Quentin Dupieux and John Waters. 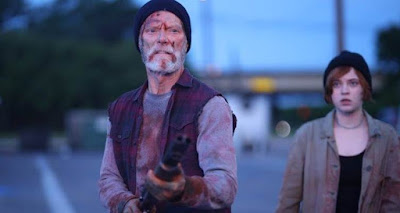 Next up is the UK premiere of VFW, directed by FrightFest Glasgow favourite Joe Begos. This break-neck action blood-blaster, pitching Vietnam vets against an army of punk mutants, is every bit as gobsmacking as his recent BLISS. Joe will be joining us.

This year’s feast of ferocious frights ends with the UK premiere of A NIGHT OF HORROR: NIGHTMARE RADIO, an anthology constructed by noted Argentinian duo Nicolas and Luciano Onetti (Francesca and Abrakadabra), who’ve assembled an impressive line-up of recent festival-touring horror shorts to deliver a refreshingly unique new kind of shock omnibus.

In addition, there are two fabulous shorts; Gustav Egerstedt’s LIVE FOREVER, a brilliant musical tribute to all the poor victims in horror films that didn't make it to the sequel, and BLEED, the latest from the talented Femme Collective – an anthology of six micro-shorts from emerging female directors which explore the horror of being a modern woman.

Plus, let’s not forget the great giveaways, surprise clips and Q & As!

FrightFest Weekend Passes are £75 and available from noon on Mon 20 January, 2020.  Passes will be exchanged for admission wristbands, which must be worn at all times to access all FrightFest films on Fri 6 March and Sat 7 March ONLY.

Tickets for SYNCHRONIC and DEATH OF A VLOGGER, plus individual tickets for the Fri/Sat films are on sale Mon 3 February, from noon. Price: £11.50. £9.30 concessions


How to Buy Tickets

All performances will start at the advertised start time. Late ticket-holders will not be admitted.

Synopsis: Two New Orleans paramedics' lives are ripped apart after encountering a series of horrific deaths linked to a new designer drug with bizarre, otherworldly effects. So prepare to be re-dazzled by the brilliant auteurs of THE ENDLESS, SPRING and RESOLUTION inventively playing with time and space again, continuing to add layers of exhilarating ambition and stimulating creativity to their unique cinematic universe.

Synopsis: A vlogger gains viral fame after one of his eerie videos contains an alleged out-of-this-world haunting. Following YouTuber Graham as he investigates the darker supernatural side of the web and dealing with the effects of being famous on the internet, this trip down a hellish rabbit hole includes interviews, cat videos, ripped YouTube content, fun nonsense, archive material, tension and unusual scares.

Synopsis: Best friends and millennial entrepreneurs Max and Drew run a popular webcast that streams live exorcisms. Of course they are all staged with terrific special effects but today, fate has a big twist in store. The actress hired to fake being possessed actually does become possessed by a real demon. Worse, the victim is Drew’s real girlfriend, Lane. Together the dumbstruck duo must work against the show clock to figure out the demon’s sinister motive, while the devilish succubus exposes the trio’s dark secrets before a rapidly growing global audience.

Synopsis: Excited to introduce her new boyfriend Bruno to her best friends, Alicia organizes a sun-drenched barbecue and swimming party at an abandoned quarry near her hometown they used to frequent as children. At first, it’s all good times, but as the day progresses, secrets are revealed, macho bravado and jealousy appears and bonds are broken. And soon an act of brutality unleashes everyone’s true natures.

Synopsis: For marine biology student Siobhan, it was supposed to be a research excursion with a trawler crew fishing the West Irish seas. But when they hit an unseen object and become marooned, a mysterious parasite infects their water supply. Soon the oozing force infiltrates the entire vessel and turns Siobhan’s journey into a claustrophobic fight for survival.

Synopsis: Jack's job is to fix up the house. Spectral agent Muriel's eternal task is to haunt it. They should be enemies, but they become fascinated by one another and eventually smitten, leading them to question everything about their work, lives, and decisions. But as pressure mounts for them to fulfill their duties, something’s got to give for them to have the time together they both so desperately want.

Synopsis: Sam inquires about a ‘Help Wanted’ sign outside a funeral home and in her interview with owner Montgomery Dark, four gruesomely disturbing stories are told. Moving chronologically from the 1950s to the 80s, a housewife finds a mysterious presence in her bathroom, a college boy gets a taste of his own fraternizing medicine, a husband makes tough decisions about his wife and babysitters are murdered by a homicidal maniac.

Synopsis: After his wife's sudden suicide, Detective Jeff Anderson (Shawn Ashmore from the X-MEN franchise) becomes convinced that she has really been murdered. Obsessed with his ongoing investigations, he finds out that she was indeed the victim of a heinous crime. And although no one believes what he’s uncovered, Jeff knows he’ll have to break all the rules and go to horrendous extremes to stop the slaughter of other women.

Synopsis: Korea’s biggest pharmaceutical company conducts illegal experiments on humans. One test goes wrong and creates a sexy zombie who escapes and winds up with the crazy Park family, owners of a country gas station. But when the head of the household is bitten, it restores his youth, so they monetise Zzong- bie’s powers to help their struggling business. Events take a grisly turn for the worse…

Synopsis: Recently Born Again, Maud is a young Scarborough nurse, visibly disintegrating both mentally and emotionally as she strives for religious salvation from the demons plaguing her. Put in charge of caring for hedonistic dancer Amanda, now in the late stages of a terminal illness, Maud believes redemption is at hand. For if Maud can rescue Amanda’s soul then surely she can save herself?

Synopsis: Middle-aged Chip Gutchell is bored and miserable with his life, until he has a prostate examination and his whole world changes. For he becomes obsessed with putting anything and everything up his butt including living things. Newly sober Detective Russell Fox suspects his AA sponsor is sporting another supernatural dimension in his rear end but even he has no idea the insanity that awaits when he dives into his investigation headfirst.

Synopsis: Set in the near future, where a designer drug is causing devastation, death and destruction reign supreme. Caught in a deal that goes horrifyingly wrong, innocent Lizard flees to a local VFW post where war veterans begin the ferocious fight with a deranged drug dealer and his relentless army of punk mutants. These Vietnam vets have been to hell and back but tonight will be the longest night of their lives.

Synopsis: As the host of a popular horror-themed radio show, disc jockey Rod Wilson shares tales of terror with his eager listeners. But tonight the announcer begins to receive strange calls from a child who desperately asks for help. At first he thinks it’s a bad joke until he discovers the calls hide a dark secret…


For full programme details: http://www.frightfest.co.uk
Posted by JD at 14:36