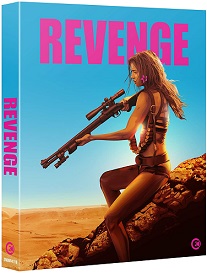 Revenge Limited Edition Blu-ray is released on Blu-ray on May 11th.

Synopsis
One of the most talked about movies of recent years, Revenge lends ‘pitch-black humour and a cunning feminist agenda’ (★★★★ Daily Express) to the classic exploitation genre, and now Second Sight Films is giving this groundbreaking gore-fest the Limited Edition Blu-ray box set treatment.

The release features stacks of brand new special features, including a new interview with debut feature writer-director Coralie Fargeat and star Matilda Lutz (Medici), whose performance is ‘gripping — a powerful mix of Lara Croft and The Bride’ says The Sun. Also included are new interviews with the film’s cinematographer and the composer, a new commentary and much more, please see details in full below. The set arrives on 11 May 2020 complete with new artwork, designed by Adam Stothard, a poster and a soft cover book with writing by Mary Beth McAndrews and Elena Lazic.

Entitled CEO Richard’s (Kevin Janssens – Undercover ) romantic getaway with his young mistress Jen (Lutz) is interrupted when his sleazy associates Stan (Vincent Colombe – Point Blank) and Dimitri (Guillaume Bouchède – Love at Second Sight) arrive early for the businessmen’s annual hunting trip. Their leering advances turn ugly, culminating in a brutal attack where Jen is left for dead in the desert. Like a phoenix from the ashes, Jen rises, and now she’s out for revenge. What follows is ‘a bloody middle finger…a demand for reckoning…a kick in the balls with a feminine combat boot’ (Rolling Stone).

Hell hath no fury like a woman scorned…and now it’s time to get Revenge.

Terms and conditions
1. Closing date 18-05-20
2. No alternative prize is available
3. When the competition ends as indicated on this page, any and all entries received after this point will not count and emails blacklisted due to not checking this page first.
4. Winners will be chosen randomly and will be informed via email.