Interview with Jordan Barker, Director of Witches in The Woods 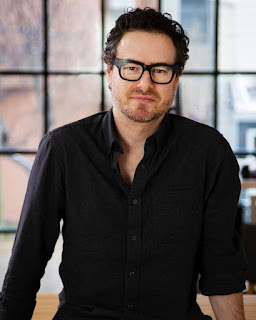 Ahead of Horror Channel’s UK TV premiere of WITCHES IN THE WOODS, director Jordan Barker reflects on the challenges of filming in sub-zero temperatures and the time-bending ambitions of his next film…


Why did you respond so strongly to Christopher Borell’s script (originally titled STRANDED) – because it mixed an age-old witch hunt tale with up-to-the-minute contemporary issues of sexual harassment?

Hi All and hope everyone is staying safe and sane during these very strange times.  Borrelli’s script spoke to me on many levels.  I felt it took a contemporary look at what it means to live in our post truth world; how our realities are shaped by the lens through by which we choose to observe.  To me the film was summed up by nothing being more terrifying than being possessed, not necessarily by a vicious evil demon, but instead by an idea.


Is it based on any actual folklore tale or urban legend? Did the Stoughton Witch Trials actually exist?

Stoughton Valley is a fictional place in Massachusetts but named after the very real William Stoughton, the judge who oversaw the Salem Witch Trials in the 17th century.


There are seven characters in the movie and what is so good about the script is that each has a proper back-story. Is that why you could attract such a great cast?

Thanks for that.  We really worked hard to make the characters as real as possible.  David Fincher once said to make all your characters right and we definitely tried to take that advise.  One thing I said during the writing was to ground each character to at least one other person in the car with some kind of issue or conflict.  I also wanted to make sure we had different types of relationships to play off of.  We thought it would be fun for instance to make one of the people in the car only connected to the others through her new boyfriend, that way when things went to shit, she’d have no one to hang on to.


WITCHES IN THE WOODS takes a very thoughtful approach to what in other lesser hands would be cliché material. How hard is it to do different yet still be creepy and involving?

I don’t know that we tried too hard to be different other than just trying to find the most exciting way to bring the pages to life.  For example we open on a very complex single take shot set inside the car as we introduce all our characters.  In some cases this might be considered gimmicky, but I believed it was the right way into the story as I wanted the viewer to start off the film as an almost omniscient observer floating through the car, following the conversation.  We are meant to start objectively and then slowly move into the subjective point of view of our lead character.

Good to see such strong, sympathetic female characters and the performances of all three actors are evidence of that. They come off as so much more level headed and together than their male counterparts?

Hannah (Jill), Sasha (Alison) and Humberly (Bree) brought so much to these characters.  During the Salem witch trials, many women were persecuted, not for any real crime, but as scapegoats for a patriarchal societies anxieties and fears.  There is a backstory laid into Witches in the Woods of an event that victimizes one of our female characters in a multitude of ways.  It was important for us to give all the characters, male and female, a place to stand up for themselves and be pushed to show who they really are and what they are capable of.


WITCHES, tick. But what about the WOODS? You make the forest environment as much a character as anyone else?

I don’t know about you, but whenever I’ve found myself alone at night in the wilderness and I take a moment to tune into the sights and sounds around me, I feel like I’m paying attention to something that maybe I should have noticed earlier on.  You realize it’s always been there, just outside your senses and when your brain tunes you in, you think for a moment…why? Is there danger?  In so, the environment can become a foe and especially in a film like this, it was important to make the audience feel that way as well.


What were the challenges of filming in the freezing cold in Ontario, Canada, especially as you caught pneumonia?

Everything is just slower. Everyone takes up more space because they are layered up.  Equipment freezes. Safety precautions have to be put in place due to dangerous terrain and weather.  We wanted our characters to be wearing fashionable clothes that look good, but don’t necessarily protect you from long periods of time in the cold.  The film has an underlying theme about the thin veneer that separates us from chaos and our reliance on technology (cell phones, the car, heat, fabrics) comes at a cost.  That being said, the crew was warm and the actors were as cold as their characters which made it incredibly difficult for them to do long takes out in the cold.  We also had issues with our lights up on big cranes, swaying in the harsh winds.  Continuity was one of the hardest things to deal with in regard to the cold.  Our film takes place over one night but we filmed it over a month and the weather kept changing.  One night it would snow, then the snow would melt, then it would be windy etc.  And then yes, I caught Pneumonia! 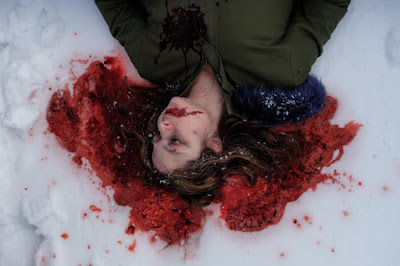 Is the overall message about the primal urges that kick in when you go from what passes as civilization to the rawest of natures?

I think that is certainly part of it.  I said above one of the most interesting threads throughout the film for me is the thin veneer between civility and chaos.  This is a group of friends going on a trip, but what happens when you peel the onion.  Are they actually good friends? It’s very easy to be nice and civil when your life isn’t at stake.  This also plays into the question of truth and point of view.  We all agree to disagree and can see the world slightly differently in a civilized society.  What happens when that falls apart? All of a sudden, a different point of view makes you the enemy and you have to be eliminated…for survival. 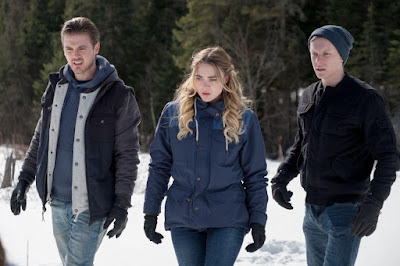 You’ve been to FrightFest with three movies (THE MARSH, TORMENT), what is the importance of the global genre festival circuit to your work?

I am so grateful to have been invited back to FrightFest.  As directors, you spend so much time tinkering in a dark room well after most of the crew has left and done 2 or 3 other films.  Being able to share the work in a live space with other like-minded genre fans across the world is an integral part of keeping the artform alive. It is honestly why I do it, to share the experience with an audience.

I can tell you that my next project is a time-bending sci-fi horror called HARBINGER.  It’s an adaptation of a LoveCraftian short story about a group of particle physicists who are working on a machine to transmit information faster than the speed of light.  When they begin receiving ominous messages from their future selves, things take a dark and dangerous turn as they race to save themselves from a mysterious entity.  It’s a bit of a Primer meets The Thing meets Memento.


WITCHES IN THE WOODS is broadcast on Horror Channel, Saturday 29 August @ 21:00
You can also purchase from Amazon at - https://amzn.to/3jd8QY8 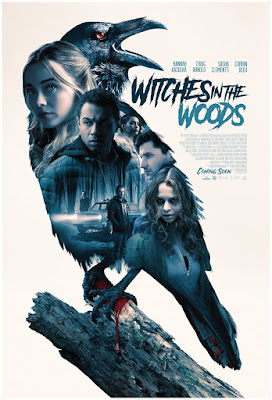