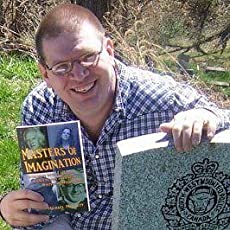 I’ve been writing for a very long, long time.
I started writing for the school newspaper The Jaguar News in sixth grade. My first pro sale was in 1983 for a regional music magazine, The Prairie Sun I did a record review of Pink Floyd’s “The Final Cut.” My first national sale was in 1993 to Starlog magazine. And my first book was in 2003. I’ve written hundreds of articles and interviews in newspapers and have over 45 published books.

When I was a kid, I use to watch a local horror show called Acri Creature Feature that showed all the classic horror movies and I really loved them. I started reading the books, which the movies were based on sometime in Junior High School, Dracula by Bram Stoker and Frankenstein by Mary Shelley. After that I was hooked.

I spent close to a decade writing and trying to get my first book, the vampire novel LIQUID DIET published. I tried everywhere. At that the time the suits said, “Vampire books are dead. Everyone loves a serial killer story. Can you change your vampire into a serial killer instead?”Vampire books have been popular since Bram Stoker wrote DRACULA over a century ago.” This was long before TWILIGHT or TRUE BLOOD.

One day I was talking to Bentley Little and he gave me some excellent advice. He said it was time to put my vampire novel in the trunk and begin another. A lot of writers never get their first books published, including Mr. Little. I started working on another horror novel, called MONSTER BEHIND THE WHEEL, but figured that might take a lot of time to get published. In the meantime, I needed a new game plan. I was talking with my friend Mark McLaughlin about this and he suggested I do a “best of your genre interviews” type book.

I sent a query to a small publisher who specializes in collectible books. The editor wanted to publish the book, but in the end, I decided my book wasn’t right for this house. Next, I sent it to a publisher in Spain. The editor also wanted to publish the book, but ultimately, it didn’t work out there either. During the World Horror Convention in Chicago, I talked to William F. Nolan about the book project; he was enthusiastic, saying if two publishers liked it, a third was probably around the corner very soon. And he was kind of correct about that. About ten minutes after meeting with Nolan, I talked with Neil Gaiman about the book. He suggested that publisher John Betancourt at Wildside Press might like it. So I sent a query and three chapters about my new book idea called GIANTS OF THE GENRE to Mr. Betancourt. He read the three chapters and outline and politely rejected it.

A couple of weeks later, on the fourth of July weekend, 2002, I was thinking about Betancourt’s rejection. He said a lot of nice things in the rejection. So that Monday, I wrote back to the publisher saying something like, “Hey John, you’ve been in the publishing business for awhile, who would you recommended I send my book to.”

John wrote “You know, funny thing is — I’ve been bugged by GIANTS since I turned it down. This usually means I’m convinced on some level that I’ve made a mistake. If you are still interested in having me publish it, I’ll do it next year.” And that is how I got my first book published. Mark McLaughlin wrote the introduction.

Since that time, I have had other books published with Wildside Press including MORE GIANTS OF THE GENRE, A LITTLE HELP FROM MY FIENDS and DRACULA TRANSFORMED & OTHER BLOODTHIRSTY TALES (co-written with Mark McLaughlin).

Maybe that is the reason I have had over 45 books published. Here is a link to a listing to all my books:
https://monstermikeyaauthor.wordpress.com/2016/01/31/michael-mccartys-book-publications-1-40/


What is your favorite kind of monster in dark fiction?

I’m going to cheat and name two: vampires and Frankenstein’s monster. Big fan of both of and wrote two books about them as well. FRANKENSTEIN’S MISTRESS: TALES OF LOVE & MONSTERS published by Grinning Skull Press and DRACULA TRANSFORMED & OTHER BLOODTHIRSTY TALES by Mark McLaughlin & Michael McCarty published by Wildside Press.

The reason I think people like vampires over other monsters is they seduce their prey. And Frankenstein’s monster is so popular because he is an outcast of society and only wants to be loved and how can’t relate to that?


Tell us about your collaborations.

I wrote a great article about this very topic in ESOTERIA-LAND and the ebook is only .99 cents. Check it out.


Tell us about your Stoker experiences especially the poetry book.

Scott Edelman once gave me a big pin that says, “5-Time Stoker Award Loser.” That pretty much sums it up.

The writing business is a rough roller coaster ride of highs and lows. You have to hold on for dear life and pray for the best sometimes.

Other accomplishments, having Jimmy Fallon hold a copy of my book CONVERSATIONS WITH KRESKIN on his show.

And of course, having the fans, they are the bright rays of sunshine in this dark fiction profession.

My advice is this: writing what I call a “blindside” book. Which means, you hit the reader and they don’t see it coming. They spin around and say, “Where did that come from? I wasn’t prepared for that.”

My best advice and I hate to do self-promotion here – is to read MODERN MYTHMAKERS: 35 INTERVIEWS WITH HORROR & SCIENCE FICTION WRITERS AND FILMMAKERS by Michael McCarty, available on Amazon, Barnes & Noble and at your favorite bookstore or library (if they don’t have it, have them order it).

The reason I wrote MODERN MYTHMAKERS in the first place was to talk with the likes of Ray Bradbury, Dean Koontz, Richard Matheson, John Saul, Whitley Strieber, Neil Gaiman and other 29 others – about the craft and art of writing.

I can give all kinds of advice. But wouldn’t you like to hear advice from Bradbury or Koontz instead?
Plus the ebook is only .99 cents.

The majority of my books, 40 or so have been by book publishers. Half a dozen or so, I’ve done myself. I am a writer. I like to write. I don’t like to do layout and design. I really don’t like to edit, especially edit my own work (it is a necessary evil, like voting).

I like just to write and let others worry the other crazy stuff in the publishing business. That’s show business.

I just finished up FRANKENSTEIN’S MISTRESS: TALES OF LOVE & MONSTERS which was recently published by Grinning Skull Press (the same publisher who put out LOST GIRL OF THE LAKE by Joe McKinney & Michael McCarty, a few years ago).

I am currently writing a sequel to GHOSTS OF THE QUAD CITIES by Michael McCarty & Mark McLaughlin and published by Haunted America (Arcadia Publishing / The History Press). Which was an Amazon bestseller. Here is a little about the first book:

Divided by state lines and the Mississippi River, the Quad Cities share a common haunted heritage. If anything, the seam that runs through the region is especially rife with spirits, from the Black Angel of Moline's Riverside Cemetery to the spectral Confederate POWs of Arsenal Island. Of course, the city centers have their own illustrious supernatural residents – the Hanging Ghost occupies Davenport's City Hall, while the Phantom Washwoman wanders Bettendorf's Central Avenue. At Igor's Bistro in Rock Island, every day is Halloween. Michael McCarty and Mark McLaughlin hunt down the haunted lore of this vibrant Midwestern community.

For the sequel, I am collaborating with John Brassard Jr. this time (whom I interviewed a lot in the first book). It is going to be a little different than the first book, but also a lot bigger and more photos and it should be out Fall of 2021. For the most updated news, please check: Facebook website:
https://www.facebook.com/Ghosts-of-the-Quad-Cities-103021898053505


Please in your own words, write a paragraph about yourself & your work.
I have been a professional writer since 1983 and the author of over forty-five books of fiction and nonfiction, including FRANKENSTEIN’S MISTRESS: TALES OF LOVE & MONSTERS, ESOTERIA-LAND, DARK CITIES: DARK TALES, A LITTLE HELP FROM MY FIENDS, DRACULA TRANSFORMED AND OTHER BLOODTHIRSTY TALES (with Mark McLaughlin), LOST GIRL OF THE LAKE (with Joe McKinney) and GHOSTS OF THE QUAD CITIES (also with Mark McLaughlin).

My mega book of interviews MODERN MYTHMAKERS: 35 INTERVIEWS WITH HORROR AND SCIENCE FICTION WRITERS AND FILMMAKERS which features interviews with Ray Bradbury, Dean Koontz, John Carpenter, Richard Matheson, Elvria, Linnea Quigley, John Saul, Joe McKinney, the cast and crew of “Night of the Living Dead” and many more.
I live in Rock Island, Illinois with his wife Cindy and pet rabbit Latte.
I’m on Twitter as michaelmccarty6
My blog site is at: http://monstermikeyaauthor.wordpress.com
Facebook! Like me on official page: http://www.facebook.com/michaelmccarty.horror