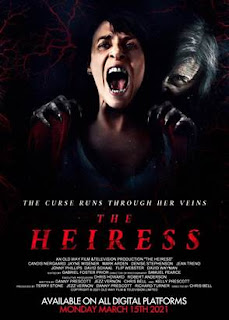 The Movie Partnership, in association with Old Way Film & Television, will be releasing the powerful and haunting supernatural thriller THE HEIRESS, both in the UK and across the world, excluding US and Canada.

It will be available to download from all major platforms including iTunes, Amazon, SKY Box Office, Sony and Google from Monday 15th March, 2021.

The female-driven story, blending the occult with contemporary familial issues, stars Candis Hergaard as Claire and Jayne Wisener as Anna, cousins who share a mysterious connection to a dark family secret. Following the death of Clare's grandmother, ancient spirits are unleashed and the women must do battle with 'Lilith', a malevolent female spirit who has returned to claim possession of Anna's unborn child.

Producers Terry Stone & Richard Turner said today: "This film is a supernatural, thematic genre piece that's focused on the centuries-old conflict between religion and science. It's also firmly a post #metoo film, examining the issues with male hierarchies and assumptions from a feminist perspective. We're thrilled that, alongside 4Digital Media, we can bring this film to a global audience".

THE HEIRESS, is also being released on Tuesday March 16th 2021 in the US and Canada courtesy of 4Digital Media.