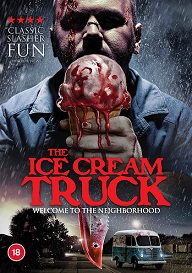 The Ice Cream Truck is released on DVD on 1st of March
And to celebrate we have a great competition for you and 3 copies to give away.
Synopsis:
Deanna Russo (Being Human) stars as a lonely housewife who moves back to her home town where she captures the attention of her neighbours teenage son. Her forbidden fantasies and neurotic anxieties manifest themselves in the form of an evil slasher that stalks the suburbs in an ice cream truck.
THE ICE CREAM TRUCK was written and directed by Megan Freels Johnston, grandaughter of the iconic American crime novelist Elmore Leonard. After festival screenings at Weekend of Fear in Germany, Grossmann Fantastic Film Festival in Slovenia and Dublin Horrorthon in Ireland, THE ICE CREAM TRUCK was picked up for distribution in North America by Uncork'd Entertainment and in the UK and Ireland by Danse Macabre.
Buy From Amazon at
https://amzn.to/37IJoGB
For your chance to win just answer the question below.

COMPETITION CLOSED
Terms and conditions
1. Closing date 08-03-21
2. No alternative prize is available
3. When the competition ends as indicated on this page, any and all entries received after this point will not count and emails blacklisted due to not checking this page first.
4. Winners will be chosen randomly and will be informed via email.
5. Entries that come directly from other websites will not be accepted.