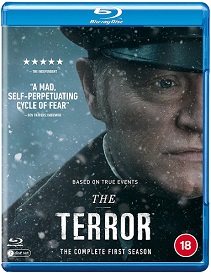 The Terror is released on Blu-ray on 25th of April
And to celebrate we have a great competition for you a 2 copies on Blu-ray to give away.
Synopsis:
Starring Jared Harris (Chernobyl), Ciaran Hinds (Game of Thrones) and Tobias Menzies (The Crown), The Terror is inspired by the British Royal Navy's real life expedition into uncharted territory as the crew attempts to discover the fabled Northwest Passage. Finding instead a monstrous, gothic horror that stalks the boats and the minds of the men in a desperate game of survival, the men are forced to face their worst fears. Frozen, isolated and stuck at the end of the earth, the crew must simultaneously battle the elements, the supernatural and eventually themselves to try to overcome the true Terror. This is the UK BBC listing with English language with English subtitles
Buy From Amazon at
https://amzn.to/3gtG5Iu
For your chance to win just answer the question below.

COMPETITION CLOSED
Terms and conditions
1. Closing date 03-05-21
2. No alternative prize is available
3. When the competition ends as indicated on this page, any and all entries received after this point will not count and emails blacklisted due to not checking this page first.
4. Winners will be chosen randomly and will be informed via email.
5. Entries that come directly from other websites will not be accepted.