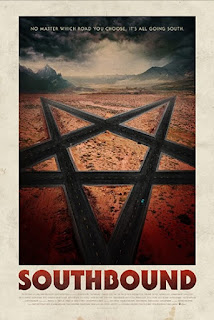 Southbound was included on numerous Best Horror Films of 2016 lists including those by Rolling Stone, Buzzfeed and the Thrillist.

In a desolate stretch of desert highway, weary travelers - two men on the run from their past, a band on their way to the next gig, a man struggling to get home, a brother in search of his long-lost sister and a family on vacation - are forced to confront their worst fears and darkest secrets in these interwoven tales of terror and remorse on the open road.

Rated R for bloody horror violence, language throughout and brief drug use