COMPETITION: Win Tigers Are Not Afraid on Blu-ray 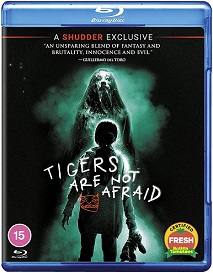 Tigers Are Not Afraid  - Released on Blu-ray from 23 August
And to celebrate we have a great competition for you and 3 copies on Blu-ray to give away.
Synopsis:
Lauded by horror royalty Guillermo del Toro and Stephen King, Issa López’s critically acclaimed Tigers Are Not Afraid is a harrowing and enthralling film that is set amid life in Mexico where the cartel wars are part of everyday life and is shown through the eyes of innocent children. Premiering at FrightFest and originally released on Shudder, this astounding feature is now set for its UK Blu-ray, DVD and digital release.
Drawing comparisons to Pans Labyrinth with its dark fairytale nature, and combining real life horror with fantasy, Tigers Are Not Afraid captivates and shocks its audience with its young cast bringing the tale to life. Critically acclaimed at international film festivals, and with beguiling performances from Juan Ramón López in his feature debut and Paola Lara in the lead role makes the movie all the more terrifying and poignant.
Estella (Paolo Lara) lives in Mexico where a sprawling drug war is raging. When a harrowing shooting takes place near her school, her teacher passes her three pieces of chalk capable of granting three wishes. When she returns home, she finds her Mum missing, taken by the drug lords. Using one of the wishes, she’s plunged into a supernatural misadventure. Forced to join a street gang to get answers, and take down the cartel, will Estella be able to find out what happened to her mum and defeat the villainous crime boss Chino?
Tigers Are Not Afraid is a not to-be missed stunningly original piece of filmmaking that shines a light on the shocking lives of children embroiled in the cartel wars, set against a thrilling supernatural fantasy.
Tigers Are Not Afraid  - Released on Blu-ray from 23 August
Pre-order on Amazon: https://amzn.to/3jX12f5
For your chance to win just answer the question below.

COMPETITION CLOSED
Terms and conditions
1. Closing date 30-08-21
2. No alternative prize is available
3. When the competition ends as indicated on this page, any and all entries received after this point will not count and emails blacklisted due to not checking this page first.
4. Winners will be chosen randomly and will be informed via email.
5. Entries that come directly from other websites will not be accepted.
Posted by JD at 12:56