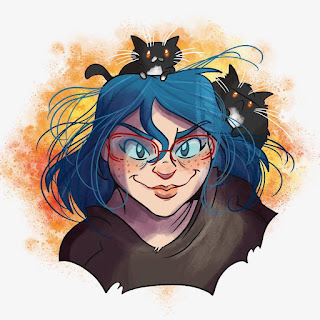 I honestly can’t think of a time when I wasn’t. Before I was literate I would write long strings of letters on paper and explain to anyone who would listen that it was a story.

I wasn’t sporty, or especially cute. I didn’t really play any instrument well and had no particular gifts except being good with words. I didn’t even see that as a skill until much later when it brought me praise from teachers.

I didn’t attempt to write for publication until I was in my 30s and suddenly found myself laid off. I was determined to make good use of the time, and began my first NaNoWriMo in 2004—which eventually became my first published novel, A Stabbing for Sadie.

Like writing, horror is something that’s been part of my life for as long as I can remember. Detroit horror host Sir Graves Ghastly was the most important part of any weekend. My mom was also very into horror, so I got taken to see things I was way too young for. I saw Alien and Fulci’s Zombi as a double feature when I was 7 years old. The trailer for Jaws gave me terrible nightmares. I imagine any psychologist could opine on why I was attracted to things that scare the hell out of me. I say “was” but it’s not like that’s changed.

Tell us about your first publisher.

Kristopher Stamp at Stonegarden.net publishing was very encouraging and supportive. He was easy to get along with and had a great team of cover artists and editors to back him up. Sadly though, he had a million other interests that sapped his time and forced him out of the publishing world. These days, Crossroads Press & Macabre Ink Digital handles all the stuff I don’t put out myself.

I refer to my work as “horror” and myself as a “horror writer.” Objectively though, my work is more akin to black comedy. It’s brutal and difficult, but it’s also pretty dang funny.

People love to be afraid, and to ponder what we might do if we found ourselves in the position of horror characters. We all like to think we could outrun Jason Vorhees or charm Hannibal Lecter with our grace and wit until he decides it would be rude to kill us. Horror lets us do that, not to mention confronting our most crippling fears in a safe environment.

No matter how bad the world gets, there will never not be a market for horror.

As bougie as this may sound, my stories are built around thematic elements that I think are important. My first book is about why it’s wrong to kill people even if you think you have a really good reason. The next was about what keeps women from being proactive in their own lives. My third book is essentially an instruction manual for society on how to create and enable a serial killer.

I write books about people that intrigue me—many of which feature main characters that are loose amalgams of people I know. And myself. I’m large with the MarySues.

I actually have some insight on this since I used to run a magazine that got a ton of subs from British writers. In my experience, the language in British horror is more...I don’t want to say ‘refined’ necessarily—but the authors seem to choose their words more judiciously. There’s less profanity, but it tends to be stronger.

Overall I noticed a subtle foreboding aspect to British horror—a lot of slow building and suspense. I think when it comes to short stories, we Americans are quicker to get to the point, which is more likely to be gory and over-the-top. I mean, we are the country who invented Sharknados, after all.

My top two faves are Psycho and Night of the Living Dead (originals, obvs, but both remakes have lots to like—fight me!).

I’m also a great fan of made-for-TV horror, especially from the 1970s.

I was in an anthology with Jack Ketchum. That was amazing, and happened when he was still with us.

Lots of people are going to give you advice. Don’t make any big decision based on what another writer told you. Ever. Always get lots of opinions from writers, readers, publishers, editors, and then do your own research.

Oh, and try not to worry about whether or not you’re a “real writer.” If you’re really writing, you are.

I’ve never been big-six published, so I can’t speak to how that goes for people. I can say that for me, the difference between getting published by a small house and self-pubbing is negligible. For my most recent collection, I decided I’d rather arrange my own cover artist (luckily my husband is an amazing graphic designer) and pay an editor out of pocket than to give someone else a share of something that represents more than a decades of writing.

If you’re not willing or able to invest in your work though, it’s a good idea to find a small publisher who will. 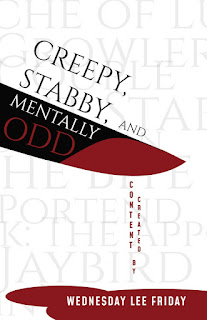 Your new book has an interesting title. Creepy, Stabby, and Mentally Odd How did you come up with that title?

I should think Creepy and Stabby are pretty obvious. I hadn’t really thought of it until someone mentioned it, but my books are all pretty stabby. I came up with Mentally Odd years ago when I was looking for new ways to describe neurodivergence. I’m a rich tapestry of mental hoosefudge, and have never liked being called ‘mentally ill,’ since illnesses are generally things we endure in the short term. I filed that term away, knowing I’d eventually find a use for it. Then I did.

The book itself has my best short stories, a few creepy poems, and several issues of a killer comic I did for a year. It’s gruesome AF though, in addition to illustrating my lack of illustration skills.

For the first time ever, my husband is helping me plot my new book, which is about a town that sits on a centuries-old roiling mass of concentrated magic. Plotting is def my weakest skill, so I’m hoping he can overcome this as we deal with an array of characters that includes ghosts, vampires, thieves, murderers, and a few immortals.

Please in your own words, write a paragraph about yourself & your work.

Some quick facts about me:

I can tap dance and play the dulcimer (though not at the same time).

I published a book under a pseudonym that revealed my (not at all) secret fascination with a really repulsive public figure.

Bombay cats are my favorite breed of cat.

Even though my books are pretty scary and creepy, I’d probably rather make people think than terrify them. Horror allows writers to do both—well, lots of things actually. Horror is kind of a perfect genre because it’s the only one we can all relate to. Not everyone has been in an epic romance, or a non-stop thrill ride. We haven’t all been cowboys or astronauts or in league with cars that turn into robots. But we’ve all been scared. We all relate to that.

Oh, and more than anything I would really, really, really like to be in an episode of American Horror Story—who is doing some of the best horror we’re seeing these days.