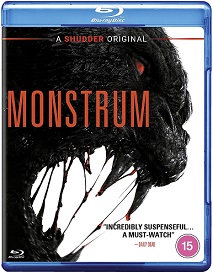 Monstrum - Released from 11th October
And to celebrate we have a great competition for you 2 copies on Blu-ray to give away.
Synopsis:
A creature feature merging martial arts madness with fantastic folklore, Monstrum is brimming with warrior action, cinematic beauty – and of course – a giant furry monster. Helmed by South Korean director and co-writer, Huh Jong-ho, Monstrum is set for its UK Blu-ray debut and on digital on 4 October and on DVD 11 October from Acorn Media International in conjunction with Shudder.
16th Century South Korea:  The plague terrorises villagers and fear runs rampant in the streets. When rumours of a fabled and ferocious beast roaming Mount Inwangsan begin to spread, fear soon turns to panic. To quell the rising terror, King Jungjong (Hee-soon Park – The Scam) brings his most trusted general, Yoon-gyeom (Myung-Min Kim – Six Flying Dragons) back from retirement to hunt the monstrous Monstrum – which threatens both palace and people.
Joined by royal court officer Heo (Woo-sik Choi – Parasite), his daughter Myeong (Hyeri Lee – Record of Youth), and loyal right-hand man Seong-han (In-kwon Kim – My Way), Yoon-gyeom embarks on a quest to find the legendary monster.
More than a simple tale of man versus beast, Monstrum considers the origins of myths and murderous monsters. Is the creature real… or a figment of mass imagination?
Pre-Order from Amazon at https://amzn.to/3B2aNjz
For your chance to win just answer the question below.

COMPETITION CLOSED
Quick Terms and conditions - For full T&C click here
1. Closing date 18-10-21
2. No alternative prize is available
3. When the competition ends as indicated on this page, any and all entries received after this point will not count and emails blacklisted due to not checking this page first.
4. Winners will be chosen randomly and will be informed via email.
5. Entries that come directly from other websites will not be accepted.
Posted by JD at 20:04