Interview with Abigail Blackmore - Director of Tales from the Lodge

Thanks to Horror Channel, TALES FROM THE LODGE recently had its UK TV premiere on British TV. How did that make you feel?
So excited! I know a huge amount of people watch the Horror Channel so I’m hoping it opens TFTL up to a whole new audience.


Looking back to its showcase screening at FrightFest in 2019, what are your abiding memories?
It was a wonderful experience! FrightFest has long been one of the highlights of my year. It was thrilling enough to have my short film Vintage Blood play there in 2015 so to have my debut feature accepted (for the main screen, no less) was massive!


Horror comedy is notoriously difficult to get right. What were the biggest challenges for you as writer & director?
It really is a fine balance but my biggest challenge was in making the moments of horror convincing, even when they’re ridiculous. I didn’t want the audience to think it was lame! I have to give the actors credit too. They knew what genres they were playing in and they knocked it out of the park.

Yes, the cast is amazing – so many gifted actor-comedians. Did you have to overcome many obstacles to get who you wanted?
The worst thing about casting is it takes a loooong time. You have to be really patient.

This was a particularly challenging film to cast because we needed six funny people who are brilliant actors and could be convincing as old friends. They needed to be roughly the same age, available for the shoot dates and willing to do it for the money we were offering. Impossible? Almost!

We also asked the cast to direct their own character’s short ‘tale’ in the film and I think for one or two of them that was the deal-maker.


The film was shot in Northumberland during the winter months. That must have been a bit challenging!
The weather was brutal! It was sunny until the first day of shooting then all hell broke loose. First torrential rain, which turned the entire location into a mud bath - our production designer Mike McCloughlin had an impossible task keeping the cabin floor mud-free - then snow, epic hailstorms and freezing winds that blew in off the lake. I’m eternally grateful to the actors for their unbreakable good humour and (frozen) stiff-upper-lipness!


You won the 2019 FrightFest Screen International Genre Rising Star. How has that accolade influenced your career?
That was the icing on the cake! I’m very, very proud of that award. I don’t know if it’s influenced my career but I’ll always mention it if I think it’ll impress someone.


You both starred in and directed your wonderful short VINTAGE BLOOD. How did you find combining both roles?
That shoot was fun. Five days working with friends in a great location close to my home. (Note: do that again!)

I think I was just so excited to be working with the incredible cast and crew and directing from my own script that I didn’t think about whether I could pull it off or not! You’ve just got to get on with it.

I’ve directed myself before so I knew I could work with me. Also I’m cheap.


Ed Barratt has been credited as producing both VINTAGE BLOOD and TALES FROM THE LODGE. Is Ed someone you plan to collaborate with again in the future?
Definitely! I love Ed. Half-man-half-lager. Not your average producer. He’s laid back and incredibly kind, but he’s no pushover either. We have a similar sense of humour and we generally like the same movies and stuff. I respect him. Man, he’s going to hate me saying all this…Good.
Tales from the Lodge is available now on DVD at - https://amzn.to/3yrluvK 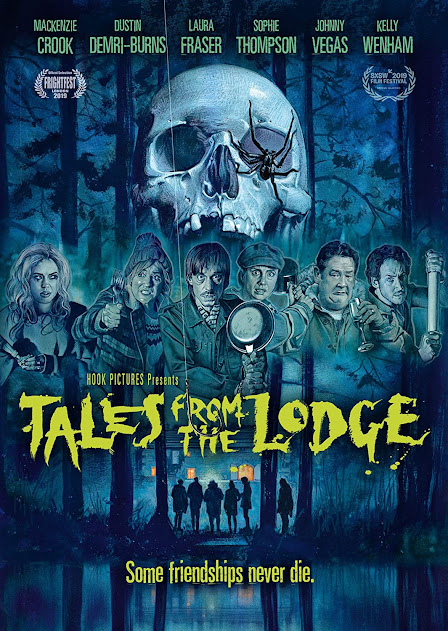