COMPETITION: Win The Krays - Code of Silence on DVD 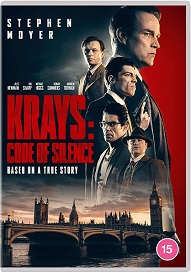 The Krays - Code of Silence DVD - Released from 27th December
And to celebrate we have a great competition for you and 2 copies on DVD to give away.
Synopsis:
Britain’s most notorious gangsters The Krays have gained legendary status with their brutal reign over 1960s London, which continues to fascinate and shock to this day – but who was the man who brought down the infamous gangsters? Now a brand-new, hard-hitting British feature Krays: Code of Silence, from director Ben Mole, produced by Lucinda Rhodes Thakrar and Jeet Thakrar of Picture Perfect, sees Hollywood star Stephen Moyer take on the role of the driven and determined Detective Nipper Read, the person who took on the seemingly impossible and dangerous mission of bringing down Ronnie and Reggie Kray (Ronan Summers). But the operation came with a price...

The sixties, London: hemlines are up, and so is the crime rate, the highest level on record. As the Beatles rule the airwaves, heading for world domination – The Krays are on the rise too… using their inimitable violent ways to gain power over the city. Extortion, robbery and murder are rife throughout the capital. Everyone knows the criminals responsible, but will anyone risk it all and speak out against them? One man, the fearless Detective Nipper Read, is sent in to tackle the unenviable task… bringing the city back under the rule of law and taking on the country’s most feared mobsters in the process.

As he faces bent coppers, political backstabbing, and terrified witnesses, Nipper becomes increasingly obsessed, putting everything and everyone he knows at risk.
Pre-Order from Amazon at https://amzn.to/3yGIWoI
For your chance to win just answer the question below.

COMPETITION CLOSED
Quick Terms and conditions - For full T&C click here
1. Closing date 03-01-22
2. No alternative prize is available
3. When the competition ends as indicated on this page, any and all entries received after this point will not count and emails blacklisted due to not checking this page first.
4. Winners will be chosen randomly and will be informed via email.
5. Entries that come directly from other websites will not be accepted.
Posted by JD at 20:34