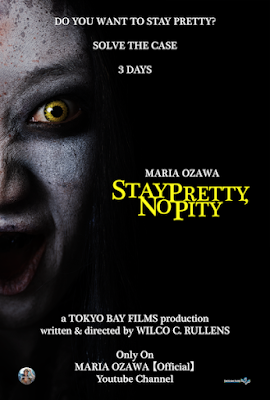 If a ghost shows herself to you in the mirror and asks: "Do you want to stay pretty?" What would your answer be?

Stay Pretty, No Pity is a short film that tells the story of Lucy (Maria Ozawa) who fled an abusive relationship and took refuge with her new roommate. Things take a turn for the worst when a ghost appears and shows her seemingly random images. Lucy has three days to decipher the clues of these visions and discover the ghost's intentions.

Stay Pretty, No Pity is a spooky extension of the ancient Japanese folklore tale of Oiwa Yotsuya (Yotsuya Kaidan). The original tale followed a samurai who after murdering his wife after she became deformed was haunted by her spirit until he became insane and killed himself.

Now hundreds of years later, Yotsuya is back! She is punishing ugly characters by recruiting the pretty, starting with Lucy.