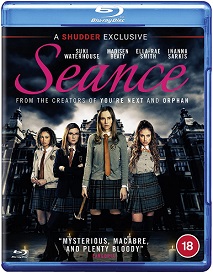 Séance - Released from 17th January
And to celebrate we have a great competition for you and 1 copy on Blu-ray to give away.
Synopsis:
From the creators of You’re Next and Orphan comes Séance, a twisted tale of dark and dangerous dabbling with the dead, from director Simon Barrett (co-writer of You’re Next and The Guest) in his feature film debut. Chilling audiences on its Shudder Exclusive premiere, this hair-raising horror arrives on UK Blu-ray, DVD and digital on 17 January 2022 courtesy of Acorn Media International.
Suki Waterhouse (Assassination Nation, Insurgent) plays Camille Meadows, the new girl at the prestigious Edelvine Academy for Girls. Desperate to fit in and make new friends, when a group of girls  invite her to join them in a late-night ritual, she feels obliged to join in.
They set up a séance to try and summon the spirit of a dead former student who is said to haunt the school halls, but little do they know the devastation they’re about to unleash.  Before dawn, one of the girls is dead, and the rest of them are left others wondering what they have awakened.
Also starring Madisen Beaty, Ella-Rae Smith, Inanna Sarkis and Seamus Patterson.
Pre-Order from Amazon at https://amzn.to/3HQOSPq
For your chance to win just answer the question below.

COMPETITION CLOSED
Quick Terms and conditions - For full T&C click here
1. Closing date 24-01-22
2. No alternative prize is available
3. When the competition ends as indicated on this page, any and all entries received after this point will not count and emails blacklisted due to not checking this page first.
4. Winners will be chosen randomly and will be informed via email.
5. Entries that come directly from other websites will not be accepted.
Posted by JD at 10:50