COMPETITION: Win Sweetie, You Won't Believe It on Blu-ray 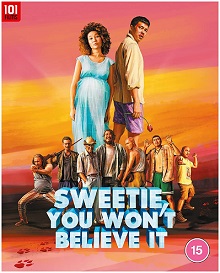 Sweetie, You Won't Believe It - Released from 21st February
And to celebrate we have a great competition for you and 2 copies on Bluray to give away.
Synopsis:
Berserk, bloody hilarious and not for the faint hearted;  Sweetie, You Won’t Believe It gets its UK release on digital and Blu-ray release from 101 Films on 21 February 2022, following its barnstorming UK Premiere at FrightFest 2021.
Lauded as the breakout favourite on its premiere, this hysterical killer Kazakhstan thriller from director Yernar Nurgarliyev brings us head-rolling laughter and a bucket load of gore.
Bickering husband and wife Dastan (Daniar Alshinov) and Zhanna (Asel Kaliyeva) are expecting their first child and Dastan is desperate to get away for one last weekend of fun before the baby arrives and he must finally settle down.  He rounds up his two best pals for a boys’ weekend of fishing and fun, but little do they know their plan for a chilled trip to the lake is about to turn into mad and deadly mayhem.
After accidentally witnessing a murder by a group of thugs, the three friends are suddenly on the run to escape their violent clutches and then things turn even wilder.  With a mysterious one-eyed man out for blood and a desperate wannabe bride and her pushy father in the mix, the body count starts to rise. Never mind fishing, will Dastan make it out alive and get to the hospital in time for the birth of his baby?
Filled with copious amounts of blood, sweat and tears of laughter Sweetie, You Won’t Believe It is madcap mayhem and  unapologetically brutal – you really won’t believe it.
Pre-Order from Amazon at https://amzn.to/3LJKggT
For your chance to win just answer the question below.

COMPETITION CLOSED
Quick Terms and conditions - For full T&C click here
1. Closing date 28-02-22
2. No alternative prize is available
3. When the competition ends as indicated on this page, any and all entries received after this point will not count and emails blacklisted due to not checking this page first.
4. Winners will be chosen randomly and will be informed via email.
5. Entries that come directly from other websites will not be accepted.
Posted by JD at 13:16